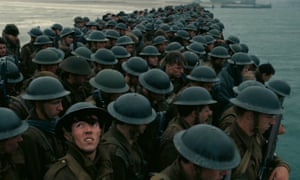 “You can practically see it from here… ” Kenneth Branagh’s stoical naval commander is talking about “home”, the word that recurs throughout Christopher Nolan’s long-nurtured epic of wartime retreat. Yet he could equally have been referring to the Imax 70mm presentation in which I saw Dunkirk, and which was also probably visible from France – a jaw-dropping spectacle in which the picture for the most part stretched beyond my field of vision, both vertically and horizontally. “We have a big love for the big format,” says cinematographer Hoyte van Hoytema, who works agile wonders with the bulky film cameras used to capture such stunning images. Available in a dizzying array of projection formats (digital, 35mm, 70mm etc), Dunkirk hits our screens with aspect ratios ranging from square to oblong and all points in between, depending upon which version you choose to see. But see it you must.

The story of the Dunkirk evacuation, which saw a flotilla of small civilian vessels assist in the rescue of stranded troops from France in 1940, has been addressed before on screen. As early as 1942, William Wyler’s Oscar-winner Mrs Miniver was painting a morale-boosting portrait of ordinary people volunteering to make the cross-channel crusade, while in 1958’s Dunkirk Leslie Norman (father of Barry) gave us John Mills and Richard Attenborough exhibiting British pluck.

More recently we’ve had the astonishingly choreographed beach scene of Joe Wright’s Atonement (2007), and the larkiness of Bill Nighy bumbling through a wartime film shoot (“Can someone please get Mr Hilliard out of Dunkirk!”) in Lone Scherfig’s Their Finest. Yet despite such diverse precedents, writer/director Nolan makes this land his own with a film that will doubtless become the definitive cinematic depiction of this remarkable chapter of history.

We open with a street skirmish, as Fionn Whitehead’s young Tommy scurries toward the Dunkirk seafront, dodging bullets and falling leaflets that threateningly declare “We surround you!” Intertitles tell us that British and French troops are “hoping for deliverance… for a miracle”, while the Bergman-esque spectre of death haunts the beach. Entitled “The Mole” (after the jutting stone and wood structure from which marine evacuation beckons), this land-based narrative strand is one of three. A second, “The Sea”, finds Mark Rylance’s determined Mr Dawson piloting his “pleasure craft” across the Channel, picking up Cillian Murphy’s shellshocked soldier en route. A third, “The Air”, follows Tom Hardy’s Spitfire pilot Farrier as he battles with the Luftwaffe.

Ingeniously, these strands play out over three different time periods; one week, one day and one hour respectively. As the stories interlace, with boats, boots and planes converging at Dunkirk, so time itself is variously compressed and elongated in Inception-like loops, conjuring shifts and reversals as complex – yet still crucially as clear – as those of Nolan’s 2000 psychological thriller Memento. For all its visual splendour, Dunkirk is a masterclass in dextrous temporal elasticity, a recurrent theme for Nolan, sparked by his love of Graham Swift’s novel Waterland and explored most recently in Interstellar.With its thunderous sound design, Dunkirk assaults our senses. Yet minimal dialogue means that large sections of the film play like classic silent cinema, owing more of a debt to Abel Gance’s Napoleon (1927) than to Guy Hamilton’s The Battle of Britain (1969). As for the dogfights, they rival Howard Hughes’s 1930 Hell’s Angels in terms of audience impact, placing us right there in the cockpit amid breathtaking expanses of sky. It’s an utterly immersive experience that fulfils Nolan’s promise of creating “virtual reality without the goggles”.

Beneath it all is Hans Zimmer’s devastating score, a blend of regret, tension and expectation that rises like the tide, moving from metronomic staccato stabs through growling bass beats to ethereal elegiac suspensions that bizarrely bridge the gap between Elgar and Angelo Badalamenti. Even the most nail-biting sequences have a mournful quality – Nolan cites All Quiet on the Western Front (1930) as a tonal inspiration – with which Zimmer is perfectly in tune.

There are a few false notes. Although structurally immaculate, Nolan’s script requires former One Direction star Harry Styles to deliver a line about someone having “an accent thicker than sauerkraut sauce”, a challenge even for an accomplished actor. But such quibbles aside, I was left marvelling that a film of such scale was ultimately defined not by its action sequences, but by quieter visions – of a man walking hopelessly into the sea (towards home?), or the expression on Branagh’s face as he stares out into the lost horizon. These are the things that stayed with me and that will stand the test of time.