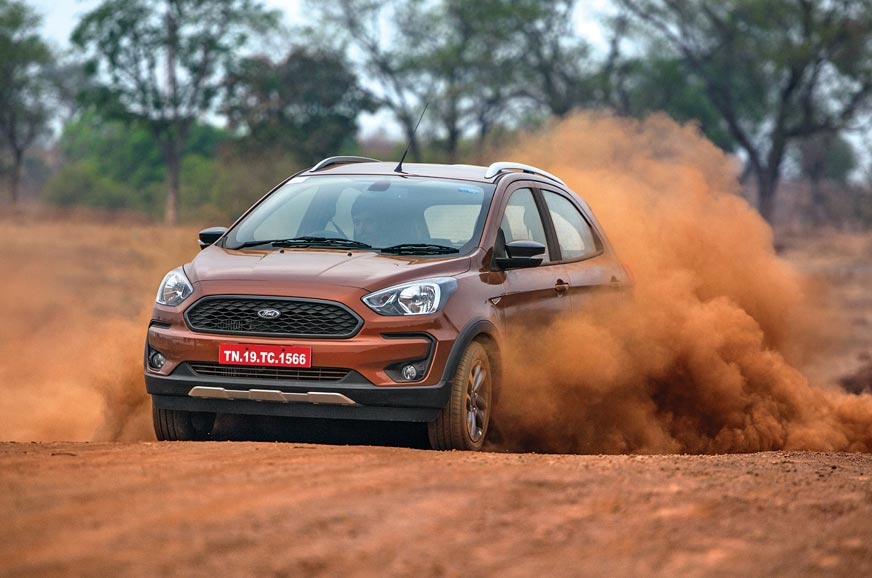 What is it?
In essence, the new Ford Freestyle is the rugged, cross-hatch version of the Figo. Although, with its raised ride height, wider tracks and bespoke electric power steering tuning, it also promises to be much more than just a jazzed-up Figo. The Freestyle also debuts Ford’s new 1.2-litre, three-cylinder petrol engine, as well as a new five-speed manual gearbox; so there’s much to talk about.

One thing’s for sure, at 190mm, the raised ride height (up 16mm) does make the Freestyle look more substantial than the standard Figo hatchback. And you’d agree the Freestyle’s cross-hatch elements do give it more personality as well. There are scuff plates at the front and rear, cladding that wraps around the wheel arches and the lower portion of the body, and, impressively, the roof rails aren’t just for show; they can support up to 50kg of load. Ford has upsized the wheels to 15-inch alloys and the split four-spoke design is attractive, but under the large wheel arches they still look a bit small. Sixteen-inchers were a possibility but, for the benefit of ride quality, Ford engineers opted for a size that allowed for chunky 60 aspect ratio tyres. 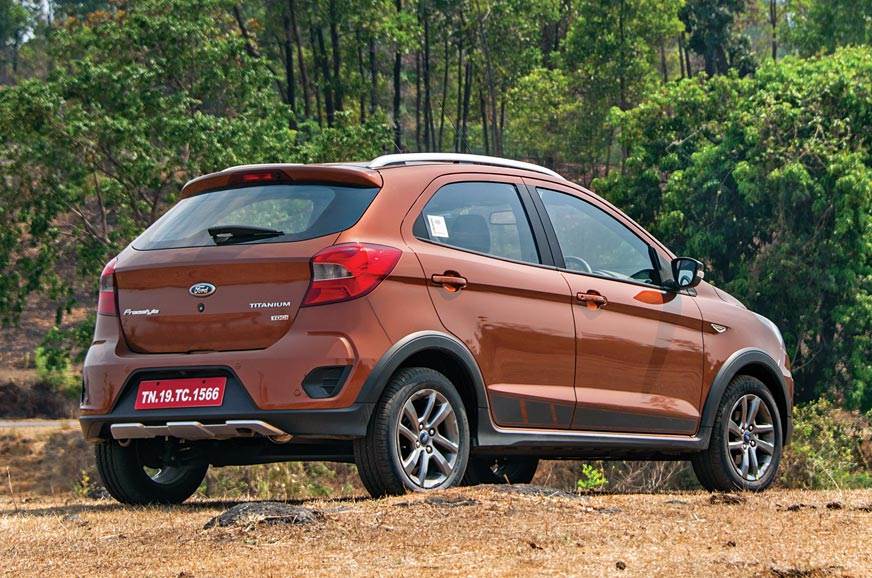 What’s interesting is that the Freestyle also previews the look of the facelifted Figo hatchback and Aspire compact sedan that will come soon. The ‘V’ of the bonnet is more pronounced now and it flows into a sharper-cut iteration of the familiar hexagonal grille. There’s generally more attitude to the front end, and what helps the Freestyle’s appearance is the nicely done bumper with its angular C-shaped fog lamp enclosures. Smoked-effect headlights, a sporty mesh for the grille and a contrast effect for the wing mirrors are other details that further enhance the look. Regarding the stickers on the lower portion of the doors, they don’t look half bad, but the faux vents on the rear bumper are perhaps a step too far. The styling addenda and reprofiled tail-lamps, however, help distinguish the Freestyle from the Figo at the back, and, in all, it is a handsome car.

Anyone familiar with the Figo and Aspire will find the Freestyle’s cabin a familiar environment, but there are differences. The unique chocolate-on-black colour theme gives the Freestyle’s cabin a different vibe, while the long-overdue inclusion of a touchscreen infotainment system also hugely helps the look of things on the inside. Ford had to redesign the centre console to accommodate the 6.5-inch screen (shared with mid-spec versions of the EcoSport) but the move was well worth it. Ford’s latest Sync 3 touchscreen unit not only brings the Freestyle’s cabin to the present but is easily also among the best systems around. Touch responses are really slick, it’s super-quick to pair with your phone via Bluetooth, and though satellite navigation is missing, it does come bundled with Android Auto and Apple CarPlay.

Touchscreen infotainment system aside, the Freestyle also gets keyless entry and go, auto climate control (its knurled dials are a premium touch), auto headlamps and Ford’s MyKey function that allows owners to pre-set max volume levels and speed limits to keep their children from deafening themselves and chauffeurs from breaking speed limits. In terms of safety kit, the Freestyle comes with dual airbags and ABS as standard. Top versions of the cross-hatch get six airbags, traction control, electronic stability program (ESP) as well as the unique active rollover protection or ARP feature. ARP works in conjunction with the ESP and can brake individual wheels or reduce engine power to prevent a potential roll.

The Freestyle may sit marginally higher than the Figo, but you don’t get a better view out. Drivers will find the large front seats with their long base nice and accommodating, but the absence of a dead pedal is disappointing and the steering is a size too large. Also, the overly simple instrument cluster looks outdated now. And if you really poke around, you’ll find the quality of dash and door plastics scratchy. 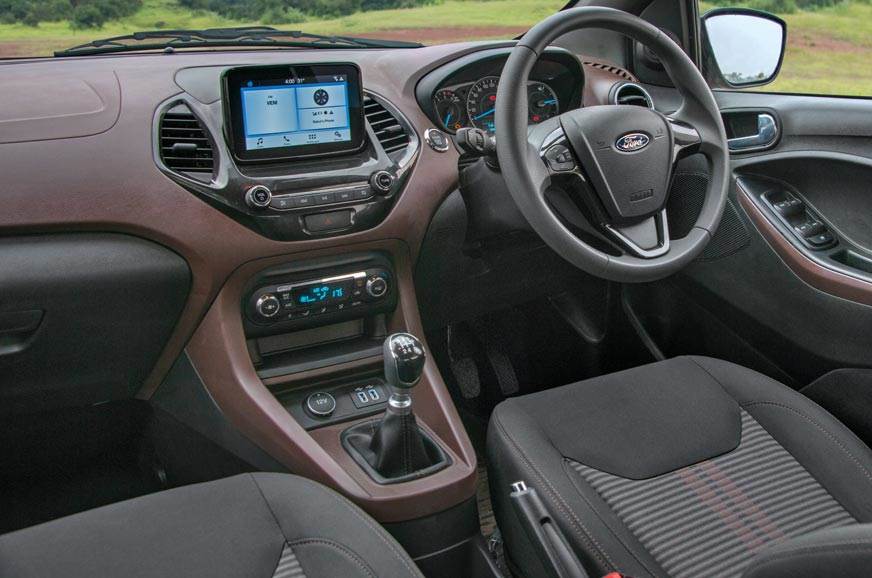 No complaints about the storage space though; at least when talking of the front section of the cabin. The front door pockets are simply massive, there are two cupholders between the front seats, and there’s even a rubberised panel to hold your phone on the centre console. Handily, there’s not one but two USB slots up front, as well as a 12V charging socket; so multiple devices can be juiced up at the same time.

It’s a bit of a mixed bag for rear seat passengers. While legroom is good and the windows nice and large, the seat is a bit soft and there’s only one bottle holder here. Taller occupants will find headroom just about adequate and the fixed rear headrest that juts out can also be bothersome.

Boot space is identical to the Figo so you can fit plenty in to the sizable 257-litre bay. It’s just that the loading lip is a bit high.

What’s it like to drive?
In one word – fun. But let’s break it down into the individual elements. The Freestyle is the first model to be offered with Ford’s new naturally aspirated, 1.2-litre, three-cylinder Ti-VCT engine. The headline figure is its 96 horsepower, making it the most powerful of the naturally aspirated 1.2 petrols on sale in India. We’ve been fans of the engine right since we had a go in a Freestyle prototype a few months ago, and the final product does not disappoint.

The engine is impressively quiet at town speeds, the build of speed is smooth and there’s little of that low-speed hesitation you’d expect at just over idle. Sure, Suzuki’s 1.2 petrol engine is peppier from the get-go but the new Ford unit still feels far more alive than the old four-cylinder 1.2 on the Figo and the Aspire in average city scenarios.

This is also an engine that gets better the more you wind it, and around 3,000rpm you can feel it get a second wind. It’s not the quickest revving of engines but the flow of power in the top end is strong, and there’s actually quite a bit of performance to be extracted by revving it to the 6,800rpm limiter. The engine does sound thrummy in the upper reaches of the rev band, but you know what? The soundtrack goes with the nature of the engine. Petrolheads shouldn’t mind at all.

Enthusiast or commuter, you are sure to like the Freestyle’s new Getrag-sourced five-speed gearbox too. It’s light, crisp and comes coupled to a well weighted clutch.

The Freestyle is also offered in diesel form and borrows the 1.5-litre engine from the Figo, Aspire and EcoSport. The engine makes a healthy 100hp and 215Nm of torque and is as likeable as ever. Responses are good from just over idle, and power build-up is nice and linear too. And with ready access to power low down in the rev range, there’s no real need to extend it either. Just as well, because the engine does get quite vocal above 3,500rpm. Still, the engine is suited to long-distance cruising and is known to be fuel efficient too.

Again, the new five-speed gearbox is a clear step up from Ford’s old IB5 unit. Just wish the clutch was lighter too.

In our preliminary performance tests, the Freestyle recorded a 0-100kph time of 11.7sec, making it the quickest of the diesel cross-hatchbacks. Its 11.98sec time in the 20-80kph dash in third gear slog is class-best too, while 14.43sec time from 40-100kph in fourth gear is second only to the Hyundai i20 Active. But we’ll pass final judgement on performance when we get all contenders together. 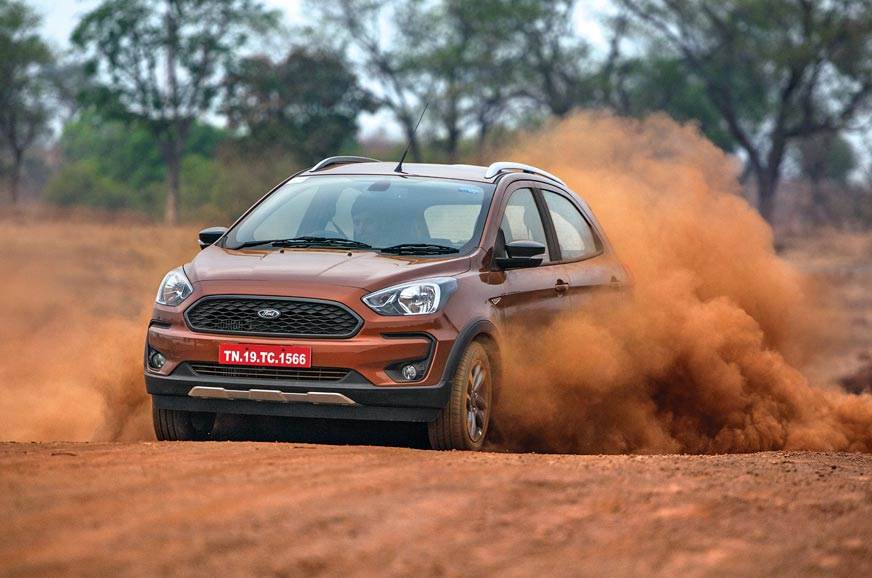 Petrol or diesel, where the Freestyle hugely impresses is in ride quality. There is a bit of jiggliness at low speeds but what’s amazing is just how well the Freestyle rounds off the bumps. The chunky tyres ably take the first ‘hit’, and the suspension beautifully softens the blow further. The Freestyle rides on 185/60 tyres on 15-inch rims and the larger rolling circumference means the tyres don’t get swallowed by large potholes, like on the standard Figo hatchback that runs smaller 14-inchers. What also comes handy is the extra 16mm of ground clearance; the lowest point of the underbody is an impressive 190mm off the ground.

Up the pace and you’ll find, the Freestyle doesn’t get ruffled by bumps taken at speed, the suspension filters out most of the thuds and only little of that road shock is transmitted to the steering on really bad patches. The whole package comes together so well, you’d think the Freestyle was just made to be driven on bombed-out roads. It’s no SUV, but it still feels like a rugged little thing. High-speed stability is impressive too but road and wind noise are not near class-best levels.

It’s got great ride quality, but does it have enough of that Ford DNA in the handling department? Oh yes. For one, the Freestyle doesn’t drive like a raised hatchback. It doesn’t feel floppy like some of the other cross-hatchbacks. On the contrary, body control is really good; the beefier front anti-roll bar helps here. The Freestyle turns into corner after corner with great poise; it feels agile and there’s loads of grip from the tyres too. The electric power steering will also delight enthusiasts. There is a bit of slack at dead centre, but in the bends, it feels very communicative so there’s no second-guessing of how much lock to give. Special mention goes to the fantastic brakes that are superbly calibrated and offer strong stopping power. The Freestyle seems set up by driving enthusiasts.

Ford engineers also invited us to test out the efficacy of the active rollover protection on the Sambhar Lake outside Jaipur as part of the media drive, and the system did its job. When we did chuck the car on the loose, gravelly surface, the electronics were quick to come to the rescue and ‘restore’ stability.

Should I buy one?
The Freestyle may seem a bit of a surprise addition to Ford’s line-up, given that it already offers a proper compact SUV in the EcoSport. But with SUVs being the craze they are in India, it can only help to have more and more ‘outdoorsy’ products in the mix. Also, as Ford officials have clarified there will be very little overlap in prices between the two models. We expect pricing in the range of Rs 6-8 lakh (estimated, ex-showroom) or about Rs 60,000 more than the standard Figo. 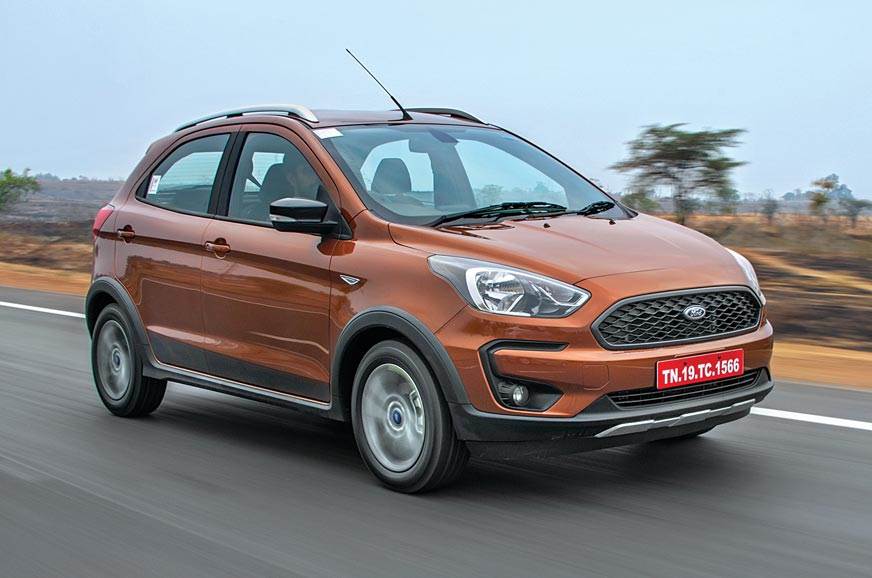 As a product, the Freestyle has some solid strengths. It feels made for bad roads, shines on twisty ones and the strong petrol and peppy diesel engines are rather nice too. It also gets most of the goodies you’d want, and, for some, the safety kit alone will be the big draw.

Sure, the Freestyle may not have the most premium of cabin and it may not be the most spacious in its class, but if you like to drive, this is the cross-hatch for you.