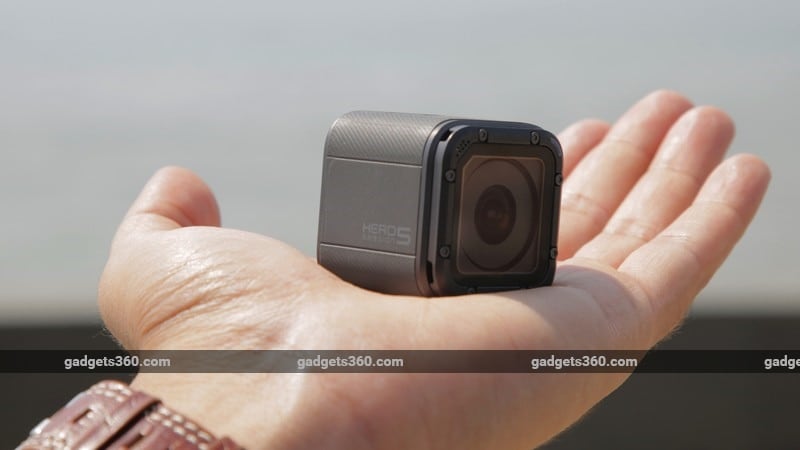 GoPro officially launched its latest range of action cameras in the Indian market around December last year, and they are now available across online and offline retail stores. We reviewed the Hero4 Black and Silver last year but didn’t have the chance to test the Hero4 Session, which we felt was the most interesting camera of the lot.

This time, we begin with the Hero5 Session, a brand new action camera that offers most of the capabilities of the older and more expensive Hero4 Black along with some new features that are exclusive to the Hero5 series. Being a premium action camera, the Hero5 Session doesn’t come cheap. For those looking at a solid, one-time investment, does it offer the best bang-for-buck?

GoPro has streamlined its lineup into three models: there’s the flagship Hero5 Black, the Hero5 Session just below it, and a third one called the Hero Session, which is essentially a rebadged Hero4 Session. Physically, the Hero5 Session is extremely compact, with a cube shape that makes it easy to place it pretty much anywhere. Its body is sturdy and has a nice rubberised coating. There’s provision in the front to attach a lanyard, which is thoughtful given how easy it could be to misplace such a device.

There’s a small monochrome display next to the shutter button on the top, along with a secondary button at the back. This combination of buttons is used to navigate the menu and change settings, although it does get a bit tedious after a point. It’s much easier to set everything up using the Capture app on a paired device. There’s a speaker and a microphone grille on the back, and two LED lights on the front which tell you what state the camera is in. You can disable the status lights altogether from the app if you wish to go full stealth. 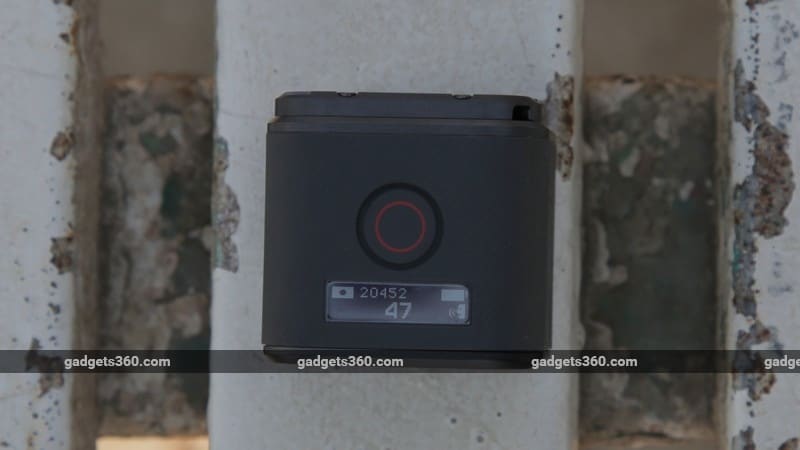 There’s a water-sealed flap on one side which covers the USB Type-C port and SD card slot. The Hero5 Session requires at least a Class 10 or UHS-1 rated SD card in order to function optimally. It’s nice to see GoPro adopt the current USB standard for connectivity.

Sadly, this camera still doesn’t have a tripod mount. Instead, it ships with a plastic casing which you’ll need if you want to mount the camera onto things. The casing is also smartly designed, giving you cutouts on three sides so you can position the camera depending on which direction you want to mount it in. This is especially useful as GoPro doesn’t provide any pivoting arms with the Hero5 Session.

You get two adhesive mounts (one flat and one curved) in the box, along with a Type-C cable. The base of the housing is compatible with older Hero 4 mounts, so you can use your existing accessories. Overall, the camera is built superbly and we love its inconspicuous design.

Physically, it’s hard to tell the new Session from the previous model but there are big changes once you get into the specifications. For starters, the Hero5 Session gets a 10-megapixel sensor with a wide-angle lens, and the video recording resolution now maxes out at 4K. It also gets a much higher burst rate of 30 frames in one second. Waterproofing stays the same, with the unit capable of functioning immersed up to 33 feet or 10 meters deep without need for an additional housing. 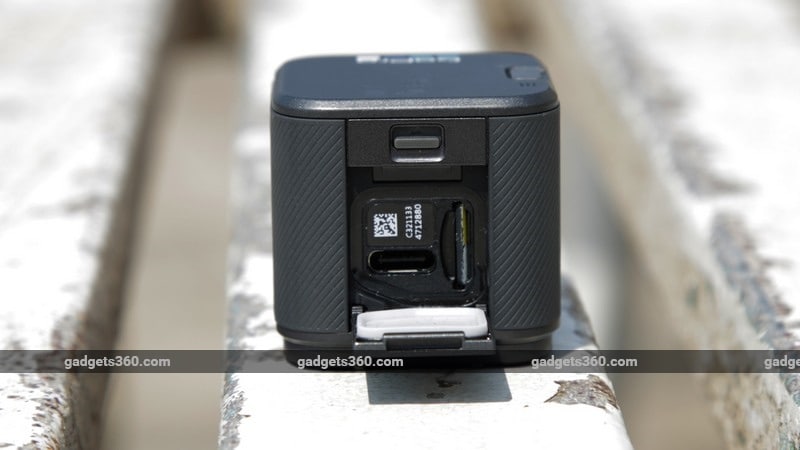 The Hero5 Session also supports video stabilisation for resolutions up to 2.7K, and a new voice control feature which lets you trigger actions like starting a timelapse or burst. We found this to be a very handy addition and it works well, provided there isn’t too much ambient noise. The list of commands is accessible from the Capture app, in case you forget them. The camera supports automatic uploading to the GoPro Plus cloud, which is a subscription-based service. It isn’t currently available in India, but GoPro tells us it will be launching here soon.

There’s Wi-Fi and Bluetooth for connecting the camera to the Capture app on your smartphone. Available for Android and iOS, this app lets you control all the camera’s settings and also shoot remotely. You can download files from the camera to your device and edit them using the Quik app. This app also lets you add background music and effects to your videos along with applying quick fixes. For more advanced editing like getting rid of barrel distortion, etc, you can use the GoPro Studio desktop app. 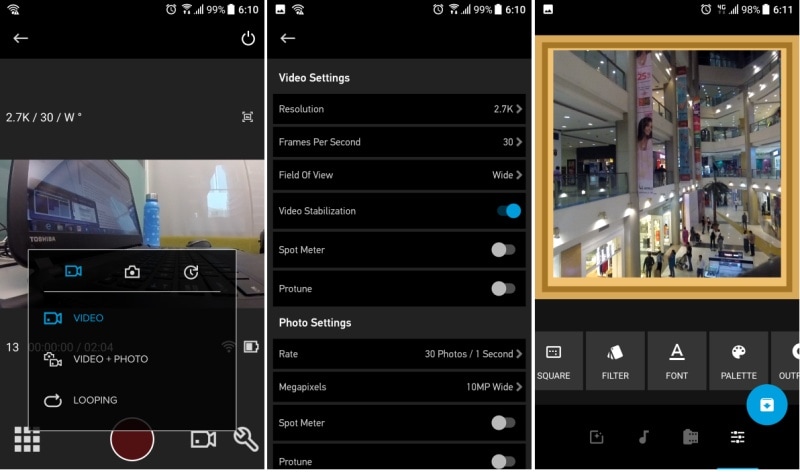 Under good lighting, the Hero5 Session manages very good videos and images. Pictures have sharp detail with punchy colours, and the video framerate is rock steady throughout. Low-light video clips tend to be a bit noisy, which is our only real gripe with the camera in terms of image quality. Just like the Hero4 Black, the Session’s outer body gets warm quickly when shooting in 4K.

Even with the latest firmware, we ran into some bugs intermittently. For example, the camera sometimes wouldn’t sync properly with its app.

It’s most fun to use the camera when mounted onto something. Unfortunately, we didn’t have any of the other mounts to play with, apart from the adhesive ones. 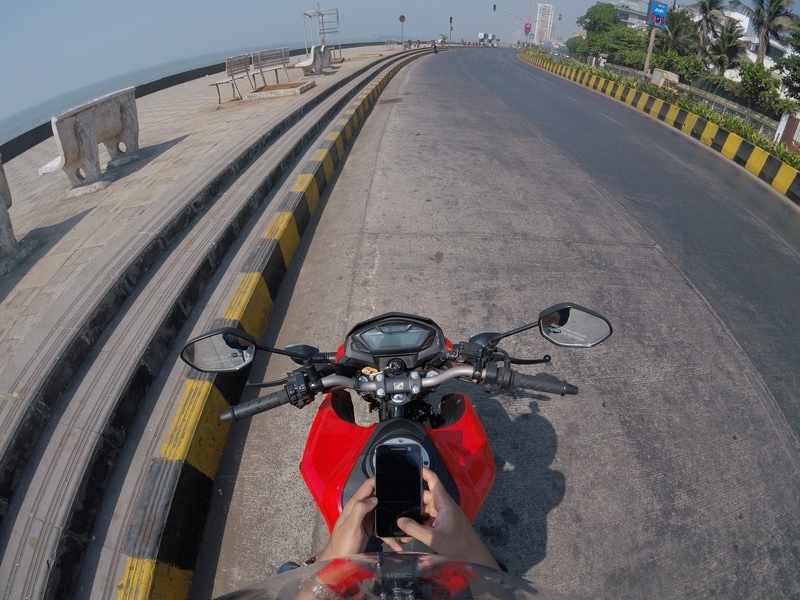 When shooting stills, it’s best to switch to ‘Linear’ mode if you want to avoid distortion, but that crops the frame. On the other hand, ‘SuperView’ offers the widest field of view but distortion can be jarring. For this reason, we found it best to stick to the ‘Wide’ view for video as it offers the best balance.

The GoPro Hero5 Session lacks certain video features that are restricted to the Hero5 Black, such as SuperView at 4K resolution, and higher framerates at resolutions above full-HD. The higher-end model is also the only one with RAW format support and built-in GPS.

Battery life will vary drastically depending on the resolution you’re shooting at, and whether or not you have features like stabilisation and the Bluetooth and Wi-Fi radios switched on. We were able to get about an hour’s worth of 4K footage, and dropping the resolution to 1080p gave us a lot more time. Having Wi-Fi on has big impact on battery life, so if you’re not going to be using the app, we suggest turning it off. Battery life is another area in which we wish the Hero5 Session performed better. 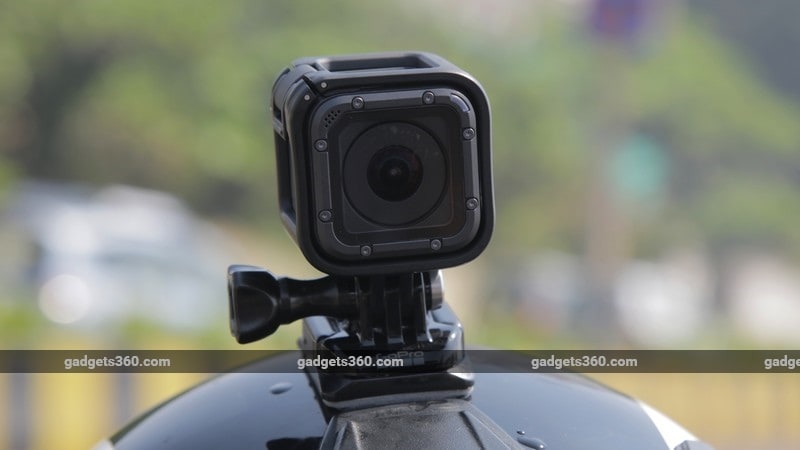 Verdict
There’s a lot to gain in upgrading from the Hero4 Session to the new model, and for professional users, it might be worth the investment. The Hero5 Session offers excellent video quality in good lighting, and plenty of shooting modes to play around with for both video and stills.

The added voice control functionality makes this camera easier to use, and electronic stabilisation results in smoother videos. Battery life is still of a pain point, and it’s still disappointing not to have a native tripod mount. Also, for Rs.29,500, we expected more than just two adhesive mounts in the box. Some pivot arms would be really welcome, especially for buyers who don’t have accessories lying around already.

Overall, the GoPro Hero5 Session is one of the best action cameras in the market right now and is recommended, if you can stomach the price.