If you have to buy a phone and your budget is restricted to Rs 20,000, the best option that everyone would suggest is the Poco F1. It offers a flagship-grade chipset, big battery, large display and good cameras – nothing beats this in terms of value. However, consumers have been craving for a quality user experience lately and some manufacturers – particularly Samsung and Motorola, have identified the need. Hence, in the last few months, both of these have come with two spectacular phones under Rs 20,000.

The Motorola One Vision is the latest one here and is priced at Rs 19,999. Instead of focusing on specifications alone, Motorola has tried to fulfil other factors that casual users care for the most – a good looking design, a large display and good cameras. The One Vision primarily focuses on viewing experience with its 21:9 display and a highly capable arsenal of cameras. It is also part of the Android One program, which means a clean interface.

Samsung, meanwhile, offers the Galaxy A50 at a slightly lower price of Rs 18,490. The Galaxy A50 wowed us when it launched a few months and even now, it doesn’t disappoint. The Galaxy A50 is one of the few phones to offer an in-display fingerprint sensor as well as triple rear cameras. It also sports Samsung’s brilliant AMOLED display and reasonable battery life.

If you have to choose between either of these two, which one should you opt for?

Galaxy A50 looks premium but One Vision looks uber cool

Samsung has been nailing it with its smartphone designs in 2019 and the Galaxy A50 is no exception. The A50 gets a modern gradient design with a glossy surface – don’t let that trick you to believe its glass – Samsung is using glossy plastic. The front has a narrow-bezel display with a thick chin and a waterdrop notch on top. With a 6.4-inch display, the phone’s wide and massive but is slim. Thanks to a plastic body, the phone is quite light as well. There’s an in-display fingerprint sensor here too which isn’t the fastest but sticks to the latest tech trends. While the Galaxy A50 goes for a rainbow-effect gradient effect like other Chinese phones, the Motorola One Power impresses with its luxurious gradient colours – the Bronze variant with ist subtle chocolate brown accents on the edges will urge you to use the phone without a cover. And that’s risky as the One Vision, unlike the A50, gets a 4D glass panel at the rear. The 6.3-inch display with the 21:9 aspect ratio makes the phone tall and slim – I found it comfortable to hold for longer sessions. And it gets a more modern hole-punch camera cutout design – this captures more space than the waterdrop notch but it adds to the design of the phone. The Motorola logo also houses the capacitive fingerprint sensor – isn’t that cool?

Both these phones can compliment style-conscious buyers but personally, the Motorola One Vision has a slight edge in terms of design and feel.

Both are feature-rich, powered by a Samsung heart

Yes, you read that right. Both the Motorola One Vision and Samsung Galaxy A50 are powered by the Exynos 7 series chips. The Galaxy A50 gets the 2.3 GHz Exynos 9610 chip whereas the One Vision gets the 2.2GHz Exynos 9609 chip. After this, the similarities end completely.

The Galaxy A50 gets two variants – one with 4GB RAM and 64GB storage and the other one with 6GB RAM and 128GB storage. It uses a 6.3-inch Full HD+ Super AMOLED display. The A50 relies on Samsung’s One UI based on Android 9 Pie. On a daily basis, the Galaxy A50 is smooth and those who are interested in gaming can also play the latest titles in high graphics. However, OneUI is heavy and is often slows down at times. With a 4000mAh battery, the phone delivers an entire day’s battery life. 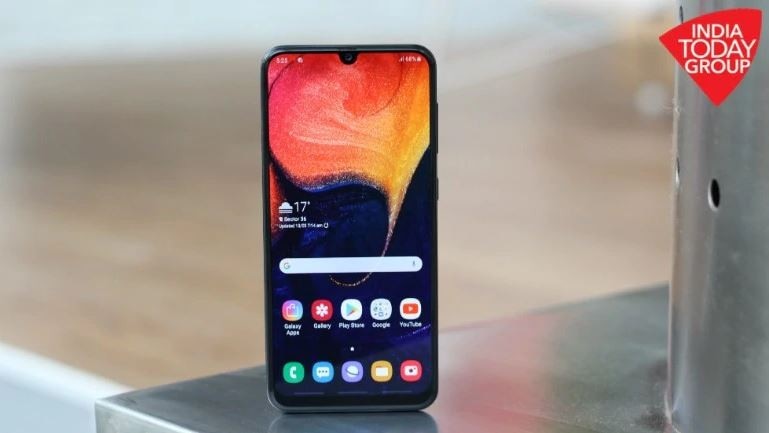 The Motorola One Vision comes only with 4GB RAM and 128GB storage. For the screen, it relies on a 6.3-inch LCD display with narrow bezels. As the name suggests, the One Vision relies on stock Android and is guaranteed to get two Android OS updates in its lifetime. The interface is light and fluid with no bloatware around. The stock Android interface uses the Exynos chip more efficiently and delivers consistently smooth performance. The 3500mAh battery is good enough for a day’s backup.

Solid camera experience guaranteed on both

The Galaxy A50 boasts of triple camera setup. You will find a combination of a 25-megapixel main camera with F1.7 lens, an 8-megapixel ultra-wide camera and 5-megapixel depth sensor. The front camera houses a 25-megapixel sensor. In our review, the Galaxy A50 cameras performed quite well, especially in daylight. The ultra-wide camera offers versatility to snap great landscape photos. In low-light, the camera struggles slightly. The selfie camera performs great with sharp and bright photos. The Motorola One Vision gets a 48-megapixel Samsung sensor with an F1.7 lens for its primary camera and a secondary 5-megapixel camera for capturing depth data. While we haven’t spent much time with the cameras, initial impressions turn out to be good. Photos look good in daylight while the phone seems to perform well at night, especially with it Night Mode – the overall performance seems superior to the Galaxy A50. Keep an eye for our full review of the One Vision’s camera very soon.

Motorola One Vision vs Galaxy A50: Which one’s worth your money?

The Galaxy A50 is for those who want a punchy AMOLED screen, an ultra-wide camera and an easy-to-use user interface. With a starting price of Rs 18,490, the Galaxy A50 is also cheaper than the Motorola One Vision and it offers an overall premium proposition.

The Motorola One Vision delivers high on style with its striking gradient colours, glass body and a comfortable tall as well as slim profile. The camera performance in low light is an advantage for the phone while stock Android interface delivers a clean and smooth user experience. Watch out for our review of the Motorola One Vision within a couple of days.