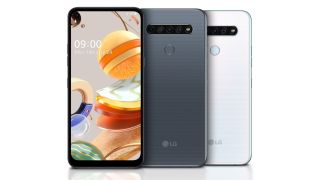 As of writing these phones don’t have a release date anywhere, but the press release states ‘LG’s 2020 K series will be available starting in the second quarter in the Americas followed by key select markets in Europe and Asia.’, and TechRadar received press releases from the Dutch branch of LG as well as US, so this is almost definitely a country that will receive the phones.

There’s no word on pricing either but the LG K series tend to be affordable and we wouldn’t expect that to change here, despite the phones all having four rear cameras.

Now, we’ll briefly run you through the three new LG phones to see if any are for you.

All three of the new LG K phones has a 6.5-inch display, but they’re not all identical. The K61 has a FHD+ display, while the others are just HD+, and the latter two phones are both 20:9 aspect ratio unlike the 19.5:9 of the K61 so will be slightly longer and thinner.

The battery on all three phones is 4,000mAh, and thanks to the relatively low screen resolutions as well as this size, the handsets will likely last two days before you need to power them up.

A specific chipset isn’t mentioned for the phones, and the LG K series have used both Mediatek and Qualcomm processors in the past so it’s hard to guess.

The real draw to these budget smartphones is the fact you’re getting a four-camera rear array with both. On the LG K61 this is lead by a 48MP main snapper, the highest resolution LG has used before. That’s joined by 8MP ultra-wide, 2MP macro and 5MP depth sensing cameras.

The LG K51S has a 32MP main, 5MP ultra-wide, 2MP macro and 2MP depth sensing snapper, and the LG K41S is the same but with a 13MP main shooter. On the front of the phones are 16MP, 13MP and 8MP front-facing snappers respectively.

While we’re dubious at the usefulness of all of these cameras, as we’ve yet to find a depth sensing camera that’s really that useful, four cameras is still an impressive collection for phones that will likely have low price tags.

These cameras are arranged in a horizontal bar along the rear of the phone, and the devices look somewhat like the Samsung Galaxy S10 range as a result, even down to the presence of a punch-hole cut-out front-facing cameras. Just below the rear camera bump is a rear-mounted fingerprint sensor, though, ruining the illusion a little.

Despite having four rear cameras, these new LG phones probably won’t have all the photography smarts of new heavyweights out now, and won’t feel as premium to use, but as previously mentioned it likely won’t cost anything near the iPhone 11 or Samsung Galaxy S20 price. If you’re looking for a new phone, then, maybe they’re worth checking out.