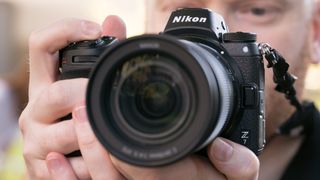 In January this year, Nikon announced that it was working on firmware that would add new features to the Z7 and Z6 full-frame mirrorless cameras, including eye detection. That firmware is now ready and, Nikon says, will roll out on May 16.

The announcement was made via a 15-second video on Nikon’s European and Asian YouTube channels. The video is just a teaser, and doesn’t offer any information other than that eye autofocus (AF) is “coming soon for the Z7 and Z6”.

Hopefully eye AF won’t be the only new feature coming to the new Z series cameras. During the initial announcement in January, Nikon also promised that the full-frame mirrorless cameras will get support for RAW video output that will work with ATOMOS Ninja V monitor recorder using the ProRes RAW codec.

We were also told that support for next-gen CFexpress memory cards (which are the same size as the XQD cards the Z series cameras use) will also be added, but it’s as yet unclear whether these two features will arrive with the new firmware release in May.