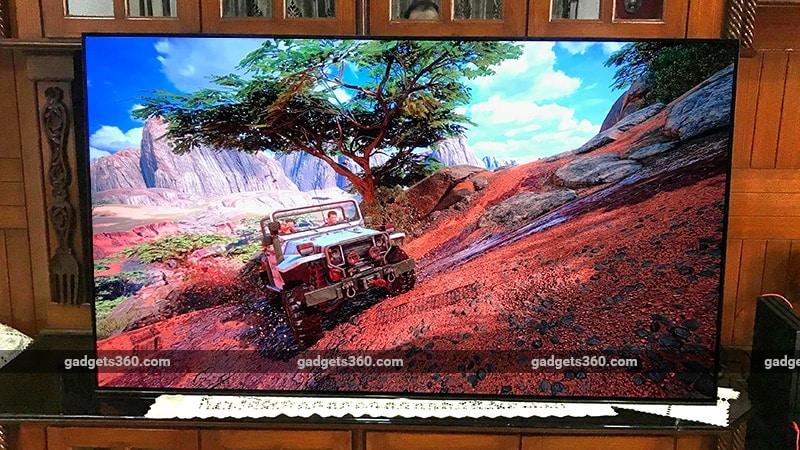 Sony’s legacy with TVs is legendary. Even back in the CRT days, Sony had established itself as a premium but reliable brand. Not to say that every Sony product is great, but even in India, people buy Sony products because they consider that they’re getting some peace of mind. That’s a pretty important factor when you’re putting down Rs. 4,64,900 for a new TV such as the new KD-65A1.

The hefty price is justified by two big reasons. The first is that this an OLED panel, which is still an expensive technology in 2017. That’s why you’ll only see OLED panels on flagship TVs, and also phones for that matter. The second reason for the price is that it’s a 65-inch panel. This might not seem like much considering how affordable 55-inch TVs have become, but the 55 to 65-inch jump is pretty significant, not just from a technological standpoint, but also in terms of how difficult they are to manufacture.

With that out of the way, what we have here today is Sony’s 2017 flagship TV in India – the very best it has to offer this year. It’s deceptively understated in its looks, especially when compared to the fancy stands and attachments that set Samsung’s QLED range apart. However, once you switch the TV on, you see exactly what you’re paying for. 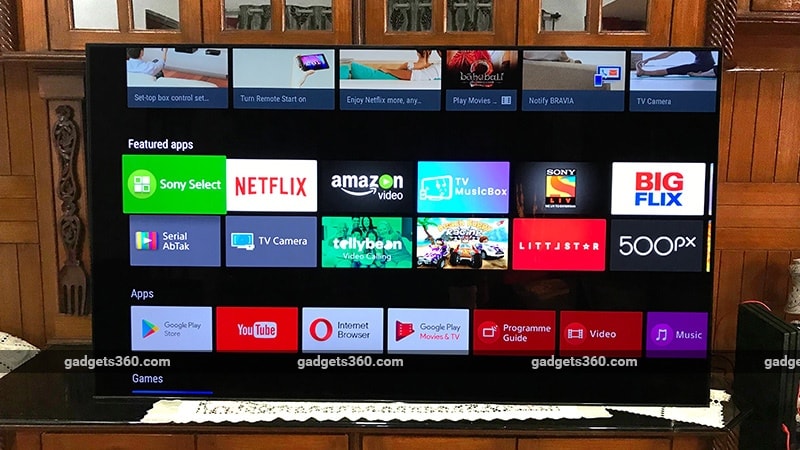 Design
The Sony KD-65A1 is big, and impressive to look at. On the front, it has a thin frame and just a minimalist white indicator light at the bottom centre. There isn’t even any over-the-top branding. Looking at it sideways, the panel is extremely thin at just 88mm. Sony has made a pretty bold decision in going with a photo-frame-like desk stand, which naturally tilts the screen upwards at a 5-degree angle. It’s an odd decision that doesn’t suit all home viewing environments, because it requires a low surface. The stand has a purpose beyond keeping the TV upright – it also houses all the input and output ports. If you’re mounting this TV on a wall, the stand remains attached and folded in. This keeps the ports accessible, albeit with a bit of difficulty. Like with any other TV, you should sort out your cabling before mounting it to a wall.

Connectivity and remote
The Sony KD-65A1 has four HDMI ports, all capable of handling 4K HDR input and one (HDMI 3) that also supports ARC (Audio Return Channel). There are also two USB ports, one being USB 2.0, and the other USB 3.0. You also get a single composite input jack, antenna terminal, headphones socket, and an optical audio output. Interestingly, there are no component inputs. Internet connectivity can be through the Ethernet port at the back, or using Wi-Fi 802.11ac. The TV also supports Bluetooth 4.1. Finally, to the left of the mount there’s another USB 2.0 port.

The remote is perhaps our biggest disappointment with the Sony A1. Not that there’s anything drastically wrong with it, but it’s a simple IR remote, not what we’d expect with a TV of this calibre. The only redeeming feature about it is that it has a button for voice input. Besides the usual controls, there are direct shortcuts for Netflix and Google Play. It would have been great if it had motion control support, like LG’s remotes or even a Bluetooth option like Samsung’s, so you don’t have to point at the TV every time, which doesn’t feel very flagship-worthy.

OS and features
The Sony A1 runs Android Nougat and comes with a number of common Android apps preinstalled, namely Netflix, YouTube, Google Play Movies, and Sony’s own Serial Ab Tak. Amazon Prime Video is easily available from the Play Store, and if you’re into Jio Movies, Yupp TV, BIG Flix, etc. there are apps for each of these as well. There are obviously games available to download as well, and it would have been nice if Sony had included a controller of any kind to let us play them, but the IR remote doesn’t support motion control, so you’ll need a supported accessory. The TV does come with a tiny IR blaster cable that you can use to control other devices in your home theatre using the TV remote.

Sony has a very interesting way of handling audio with this TV unit – the screen itself is your speaker. The KD-65A1 has two actuators that use the surface of the screen itself to emit audio. It’s fascinating to hear the audio emerge right from where the image is, and it does create a sense of immersion that works really well. For lows there is a separate sub-woofer, and we’ll get to the audio performance of the unit in a bit.

Video performance
OLED TVs are inherently capable of producing brilliant blacks. The panel technology is excellent for taking advantage of dark environments, and there are movies and games in which deep black levels make or break the immersion. The Sony KD-65A1’s OLED panel is stunning when it comes to movies, regardless of the input medium.

Our tests included a variety of films and TV shows that showed off the panel’s strengths and weaknesses. Gerald’s Game (Netflix), exhibits an excellent application of HDR, especially for outdoor sequences at the beginning which looked stunning with natural gradients and deep reds. Our favourite Blu-ray test disc – Planet Earth II in 4K HDR – really pushed the TV. Brighter sequences in which the camera captures the high luminosity of the sun were also handled well by the KD-65A1. That said, the same sequence on the Samsung QLED we tested earlier, had us literally squinting due to the intensity of the sunlight, which is the way it’s meant to be in our opinion. Samsung claims a maximum brightness level of 1500nits with its QLED range, whereas the Sony KD-65A1 puts out closer to 1000 nits. 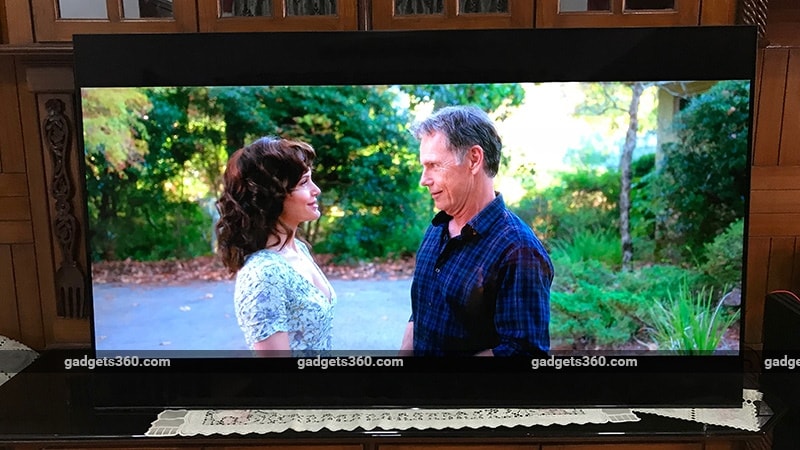 Some TV shows like Star Trek Discovery and Stranger Things 2 are excellent showcases for HDR on smaller-sized panels, but once you get to a 65-inch TV like this one, the lower mastering quality of TV shows (due to lower budgets as compared to films), becomes quite evident. This was especially true in the darker scenes of both shows. That said, our target viewing distance when reviewing TVs is 5-6 feet, which is way closer than where you’d be watching from in most likelihood. It isn’t the panel at fault here, it’s the mastering of the medium.

Non-HDR content that’s rich in colour saturation, such as Hindi films, Hollywood action movies and TV sitcoms were handled pretty well. The enhanced contrast of the OLED panel worked extremely well in The Dark Knight, which has quite a lot of wide-aperture night shots. As a result of the panel’s high contrast, the colour tones and gradients are more easily noticeable than on most other panels. There is an option to force HDR, but we found that the picture quality esd better with that turned off, because it allowed for more natural-looking bright spots and colour tones.

Sony’s motion enhancement features are turned on by default, and you can even optimise the TV’s brightness according to the light in the room. We preferred keeping both these options disabled. Viewing angles are great on the Sony KD-65A1. There’s no image quality degradation no matter what angle you look at the screen from. Rest assured that in terms of image quality, there won’t be a bad seat in your home theatre. Upscaling worked wonderfully on the KD-65A1 as well. Sony TVs are known to reduce compression artefacts and upscale lower-resolution media well, and of course, this flagship model is no exception. You’d have to look closely to determine whether any particular Blu-ray playing on this TV is not true 4K. DVDs did get a bit soft in the upscaling, but not to the extent that the experience was hugely degraded. Of course, if you’re spending so much on a flagship TV, why would you ever play a DVD on it to begin with?

Gaming performance
Games always have an edge when it comes to showcasing HDR, and this experience was no exception. Gaming on the Sony KD-65A1 was a treat to the senses. We ran our usual test games, which include Uncharted 4, Injustice 2 and Horizon Zero Dawn, and even threw in the newly released Star Wars Battlefront 2 – all using a PlayStation 4 Pro. As expected, they all looked exceptional on this TV. Uncharted 4 and Injustice 2 look great on just about any TV, but the experience was ideal on the KD-65A1, thanks to its evenly lit panel without any kind of light leaks, colour leaks or ghostly edges. We didn’t face any input lag either, even when we tried a twitch-heavy game like Injustice 2.

Motion lag, which is a known issue with many 4K panels was handled well by the Sony KD-65A1. This is definitely an excellent panel that makes the most of the PS4 Pro’s enhanced visuals.

We tried letting the TV upscale 1080p games using a PS4, and 720p games using an Xbox 360, and both were handled admirably well. Xbox 360 games do show their age at this point, especially on a 65-inch panel. However, looking at 1080p performance, we can safely say that even if you don’t own a PS4 Pro, the visuals on the Sony A1 will still be pretty impressive. 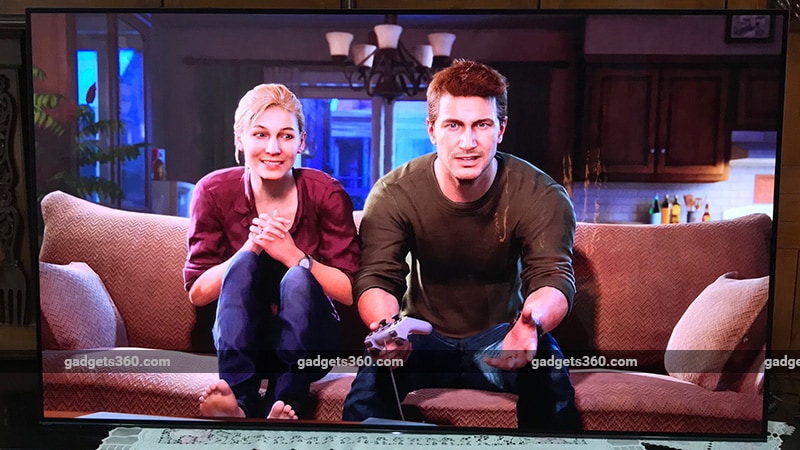 Audio performance
We didn’t honestly expect much from the Sony KD-65A1 in terms of audio performance, considering the unique nature of its ‘acoustic surface’, but consider us surprised. Audio output was crisp, and easily capable of filling a large room. Levels seemed well balanced right off the bat, so we didn’t need to change the equaliser preset. We were satisfied with the mix of highs, mids and lows for most kinds of media, be it for TV, movies or gaming. We did find a bit of a distortion at the highest volume level, but we found a sweet spot at the 90 percent mark which worked great for most movies and shows. Of course, you’d be better off with a multi-channel speaker system for making the most of this TV, but for casual usage or in case you want to keep the room clutter-free, the TV itself will do a pretty good job of handling audio.

Verdict
With the KD-65A1, Sony has presented its vision of a flagship consumer TV, and it can handle anything that you throw at it. Video quality is extraordinary, no matter what media you throw at it, and its support for both HDR-10 as well as Dolby Vision makes it future-ready as well. Even in terms of audio, this TV is unique and does an excellent job of giving you good quality, immersive sound. The maximum brightness is one weak spot, but the uniform blacks without any hue or light leaks at any viewing angle do make for a compelling argument in favour of the Sony. It would be hard not to recommend this TV for both HDR and SDR viewing. Buyers just have to be prepared to deal with its odd angular stand and lacklustre remote.