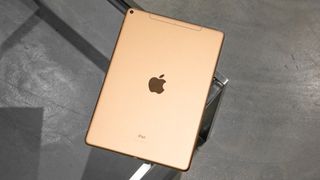 Samsung might be gaining on Apple in the smartwatch market, but when it comes to tablets Samsung’s market share is dropping, with the latest research showing that Huawei has overtaken it for shipments, rising to second place behind Apple.

That’s perhaps not overly surprising when you consider that Samsung’s current flagship slate – the Samsung Galaxy Tab S4 – only got a 3.5 star review from us, thanks in part to an unintuitive keyboard and high price.

Apple meanwhile seems to be riding high. According to the data, shared by DigiTimes Research, worldwide tablet shipments were up 13.8% year-on-year for the first quarter of 2019, and that’s likely in large part due to the iPad Air (2019)and iPad mini (2019), which launched during the quarter.

However, predictions for the second quarter aren’t so rosy, with DigiTimes Research predicting a drop in tablet shipments of 8.7% year-on-year.

In other words then, it seems that demand for new tablets might be falling overall, with the first few months of the year only getting a boost because two new iPads arrived. So the months between now and the next iPad Pro models could be quiet on the tablet front.

The research also showed that there’s far more appetite for large screens on tablets than small ones, with more than 50% of shipped tablets in the first quarter having a screen of 10 inches or above – despite Apple’s latest two slates having smaller displays than that. It’s a percentage that’s expected to continue rising in the second quarter.

This is perhaps unsurprising given how large smartphone screens now are. Bigger seems to be widely seen as better and with a large screen on your phone there’s less need for a small tablet. This also goes some way to explaining why we waited so long for a new iPad mini.