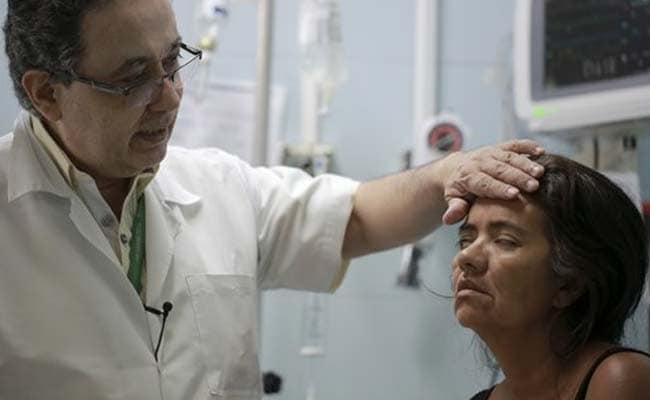 CUCUTA, Colombia:  The doctor taps Zulay Balza’s knees with a hammer and she doesn’t feel a thing. She can’t squeeze his outstretched fingers or shut her eyelids. Her face is partially paralyzed.

“The weakness started in my legs and climbed upward. The face was last. After three days, I couldn’t walk,” said Balza, 49. “My legs felt like rags.”

Balza is a patient at the public University Hospital in Cucuta, at the epicentre of the Colombian outbreak of the mosquito-borne Zika virus. Only Brazil has more cases.

Two weeks ago, she came under assault by Guillain-Barre , a rare and sometimes fatal affliction that is the Western world’s most common cause of general paralysis.

Alarm over the Zika epidemic spreading across the Americas has been chiefly over birth defects, but frontline physicians believe a surge in Guillain-Barre cases may also be related.

The World Health Organization says Guillain-Barre cases are on the rise in Brazil, Colombia, El Salvador, Suriname and Venezuela, all hit hard by Zika, though a link remains unproven.

The auto-immune disorder historically strikes only one or two people in 100,000. About one in 20 of those cases ends in death, and it is frightful.

“I thought my body was going to explode,” said Balza, sitting on her hospital bed and apparently over the worst.

Guillain-Barre attacks skeletal muscular nerves as if they were a foreign enemy. Fine motor skills rapidly erode, arms and legs tingle and weaken to numbness. Patients lose their balance, their speech. In rare cases, they require ventilators to stay alive.

The syndrome typically strikes after a bacterial or viral infection, such as influenza, HIV or dengue, though its cause can’t always be determined.

Dr. Jairo Lizarazo, the neurologist treating Balza, has seen cases increase more than tenfold since December – 30 cases in all – in this muggy city bordering Venezuela. Like Balza, many patients never showed the characteristic symptoms of Zika – fever, rashes, joint pain and conjunctivitis. Four in five don’t.

“It’s an epidemiological association,” said Lizarazo. “We don’t know exactly how it works. But it’s there, for sure.”

Associated cases confirmed or suspected based on clinical evidence number in the hundreds. Guillain-Barre cases believed to be linked to the virus have killed three people in recent weeks in Colombia and health officials have attributed another three Guillian-Barre deaths in Venezuela to suspected Zika infections.

WHO said Zika has been confirmed present in apparently just one Guillain-Barre death, in the northwestern Venezuela state of Zulia in January.

Dr. Maria Lucia Brito Ferreira, chief neurologist at Hospital da Restauracao in Recife, Brazil, said she hopes to get laboratory confirmation this month that nine Guillain-Barre deaths recorded there in the past year were Zika-related.

Cases of Guillain-Barre in Colombia – about 450 annually before Zika struck – were up nearly threefold in the past month and a half.

El Salvador has reported 118 cases since November, nearly as many as previously seen in a year. “The only explanation is the Zika virus,” said Deputy Health Minister Eduardo Espinoza.

Dr. Osvaldo Nascimento, a leading Rio neurologist, estimates Brazilian cases of Guillain-Barre are up fivefold. Reporting is not compulsory, so the government’s partial figure of 1,868 cases requiring hospitalization last year is a sketchy parameter.

An upsurge in Guillain-Barre was documented in 2013 during a major Zika outbreak in French Polynesia, with a study finding cases up twentyfold. WHO said all 42 cases recorded in the Pacific archipelago tested positive for Zika as well as dengue fever, which is also currently present in Colombia, Venezuela, Brazil and other Zika-affected countries.

Antibodies for the dengue and chikungunya viruses, which are far more debilitating than Zika, are often being found in infected patients. That is making establishing a direct Zika-Guillain-Barre link more complicated.

Like Zika, both viruses are transmitted by the Aedes aegypti mosquito and could also trigger Guillian-Barre, experts say.

Under normal circumstances, eight in 10 patients nearly fully recover from Guillian-Barre, though it sometimes takes months.

Data on Guillain-Barre is scant in most of the developing world. Of 18 countries participating in a clinical study launched by Dutch physicians in 2012, only two are in Latin America: Mexico and Argentina. Brazil just joined.

Across the region, investigators were simply unable to get government funding to participate, said Dr. Ken Gorson, a Tufts University neurologist and president-elect of an international foundation that combats Guillain-Barre.

Poorer countries were ill-prepared to manage the crisis.

Colombia’s National Health Institute is overwhelmed with a weeks-long backlog in completing tests for Zika.

The three Guillain-Barre deaths that the country’s Health Ministry attributed to Zika on Feb. 5 have not yet been confirmed by laboratory tests, said spokesman Ricardo Amortegui. Nor have the three deaths in the Venezuelan state of Lara announced last week.

The 68-year retired school administrator developed fever, rashes and muscle pain while celebrating Christmas with her family in the hot lowland state of Anzoategui.

She recovered quickly. Days later, her hands and feet started to go numb. Her tongue felt like it was asleep. She stopped eating.

The family rushed her to a Caracas hospital. She could barely walk.

Bed-ridden, she lost the ability to talk and soon, to breathe. Doctors attached her to a respirator.

“It was so quick,” daughter Nihara Ramos said between sobs. “It was like a flame consuming her from the bottom up.”

Doctors diagnosed Guillain-Barre with a spinal tap – they assumed she had Zika earlier – and suggested that the relatives obtain immunoglobulin, an expensive treatment that pools healthy antibodies from hundreds of donors. Gorson said it costs $15,000-$45,000 in the United States.

In less than three weeks, a woman who once bounded up seven flights of stairs to her apartment was dead.