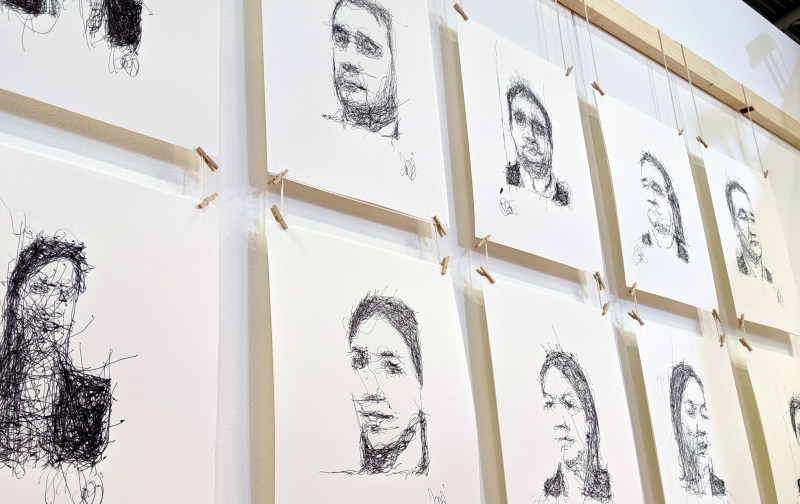 How is it possible that a robot can sketch both better and worse than I can at the same time, and yet turn out an incredible work of art? Has 3D-scanning really come so far that a simple camera and motorized jig can have insane resolution? These are the kinds of questions that were running through my mind, and being answered by the creators of these brilliant machines, at Maker Faire Rome.

There was a high concentration of robots creating art and 3D printing on display and the Faire, so I saved the best examples just for this article. But you’ll also find hacks from a few groups of clever students, and hardware that made me realize industrial controllers can be anything but boring. Let’s take a look!

THE ART OF ROBOTICS

Can robots be artists too? This project is a compelling argument that it’s possible. Patrick Tresset was exhibiting his Human Study #1, 5RNP at the Faire. It’s a set of old wooden drawing tables with robot arms made of multiple servos and a webcam on a stick. Over about twenty minutes the robot will sketch a person’s portrait, but instead of typical CNC precision, the brilliance here is in the random scribbles that turn into spectacular images. Everything is being driven by recycled laptops running Linux which command the servo motors via a USB to Serial cable.

Although it’s not shown in this video, one of the greatest delights about this art installation is that the webcam has servo motors as well so that it can move its gaze between the person that’s the subject of the portrait and the paper. It’s purely theatrical, but the anthropomorphic effect is captivating.

SIMPLY A PEN ON A STRING

On the other end of the spectrum is the precision that vector-based machines can accomplish. We’re all familiar with string plotters but this one itself is a work of art. Of note is the pulley system that moves everything down to one clean, shiny white box on the floor in the center of the drawing surface — ridding our view of the somewhat unsightly NEMA servo motors you usually find in the two upper corners of a string plotter. The drawing head itself is visually pleasing with a clean, angular design in clear acrylic.

Also popular at this booth was this pendulum-based drawing machine that produces images reminiscent of a spirograph. Of course, the well-informed reader will recognize this as a harmonograph (unrelated to Rick and Morty).

The red glove is easy enough to recognize as an input device using flexible resistors, but what about the more cyberpunk-looking hand-shaped hardware? ROBOHAND is designed to aid in physical therapy. Two different versions of the prototype are shown here. One has 3D-printed plastic components driven by linear actuators using a set of game controller thumbsticks. The other also uses linear actuators but has aluminum components and connects wirelessly to the red glove so a physical therapist can control the patient’s exercises.

3D SCANNING THROUGH THE MAGIC OF PHOTOGRAMMETRY

I made more than one visit to the OpenScan booth because the gear they were showing off was so cool. They were showing off several versions of a machine that allows you create a 3D model of an object with incredible resolution. The earliest prototype shown used a 3D-printed hoop to move a camera around the object. As the prototypes advanced, the camera became stationary and the part moved. The most recent build uses laser-cut plywood and a Raspberry Pi camera along with a tablet as the user interface. You can use photogrammetry without this kind of hardware, but as with anything, this kind of precision really amplifies the quality of the results.

Over the last couple of years we’ve seen more conveyor belt equipped 3D printers than we can count — they’re one of those products that seem to be perpetually a year away from hitting critical mass. At this point we’re not sure they’ll ever really catch on, but that hasn’t stopped Robot Factory from advancing the state-of-the-art by releasing what they claim to be the first “all metal” belt printer kit. If you’re in the market for an infinite volume printer that can continually pump out parts, this heavy duty version might be something to consider.

This resin printer from Lumi Industries is called the LumiBee. The clever build uses a cellphone’s screen as the light source for curing resin one layer at a time. This begs the question, how do you connect to the motor that raises the cured layer up to make room for the next exposure? They’re using the camera flash on the smartphone along with a simple light sensor. Even better, the pegboard nature on the bottom of the printer means this sensor can be moved around to suit the smartphone you’re using in the process.

I met with the founder of 3D Evolve who is working on lowering the barrier to entry for industrial-grade 3D printers. His assertion is that ball screws and linear bearings are the next step in the evolution of printing. But who needs this type of desktop precision? One of his stated use cases is to FDM print crowns for dentistry. Yes, you can do this with dental-grade resin, but he claims uncured dental resin is toxic and this sidesteps the issue. I’m not sure I’m sold on the argument, but from the sample prints (and the tiny Benchy) you have to admit this thing can extrude with high accuracy.

INDUSTRUINO: AN ARDUINO FOR INDUSTRIAL USE

It’s hard to get too excited over industrial controllers but I certainly did when stopping by the Industruino booth. The familiar rail-mounted hardware would be at home in any factory but these can be controlled via the Arduino IDE. Inside you’ll see two flavors to the basic model, one that’s ready to rock and the other with a protoboard inviting your hardware hacks. Most interesting to me was the disc-shaped module for adding remote sensors. Founder Loic De Buck believes that the availability of myriad sensor breakout boards for Arduino is a key feature of the ecosystem, and this provides a robust way of connecting your chosen board. Each disc has its own microcontroller and implements 4-20 mA current loop signaling to talk back to the controller.

Turning a Rubik’s Cube into a self-contained robot is a high mountain to climb but the students at Marconi Pieralisi Institute are up to the challenge. To build this huge cube they took apart a consumer cube, measured all the pieces and modeled them. The prototype was scaled up to make more room for adding motors, and the tablet interface allows you to turn one side at a time as well as automatically mix and solve the cube. I especially liked seeing the prototype circuit boards they milled before sending out their designs to the fab house.

VISUALIZING MUSIC WITH A LOT OF SERVO MOTORS

These three students from the Hisar School in Istanbul, Turkey were showing off a clever display they built from 192 servo motors. The display is modular, built in twelve squares of black 3D-printed plastic that each host 16 servo motors. Instead of horns, each servo has a printed fluorescent yellow arm that pivots to change the display. It feels like a flip-dot but is much more abstract. The software was prototyped in Scratch and has been migrated to Python with an end-goal of producing algorithmic visualizations based on whatever ambient music is playing.

Oh, the power of simplicity. This one is perhaps my favorite thing from the Faire. It’s an enlarged version of a solderless breadboard for teaching electronics. It’s hard to grasp how breadboards work and this adds a visual element by making the surface out of clear acrylic that shows the spring steel beneath that makes up the connection. Jumper wires are made from the heads of bolts that notch into the keyholes in the surface of the boards. Amy Beaulisch invented this brilliant hack which is extremely well-documented as open hardware on her site if you’d like to build one of your own.

I wish I had one more day at Maker Faire Rome but maybe that leaves more of the unknown to explore next year. Check out my first article covering the event, and make sure to save some space in your October calendar for 2020 MFR!