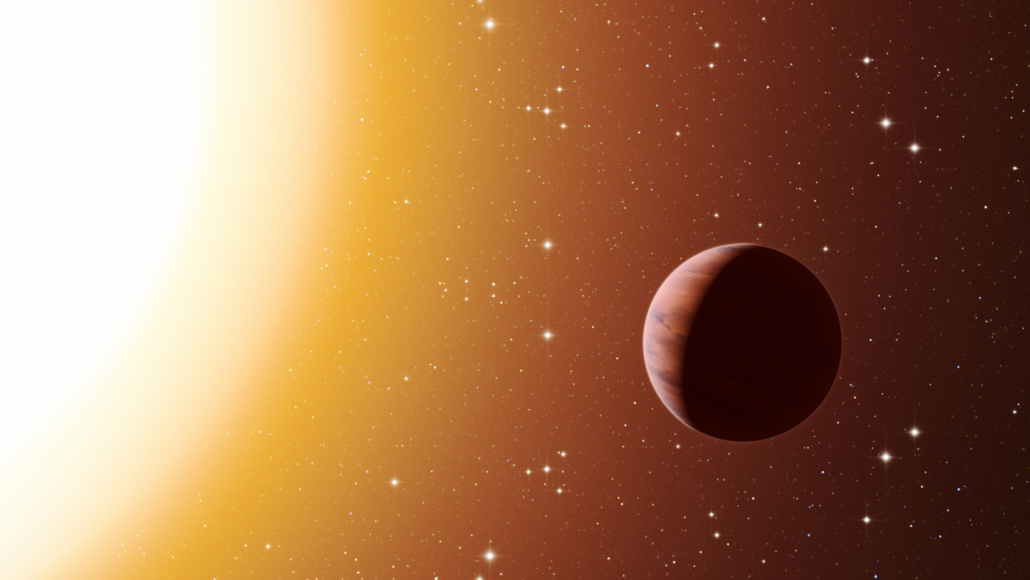 Strange giant planets known as hot Jupiters, which orbit close to their suns, got kicked onto their peculiar paths by nearby planets and stars, a new study finds.

After analyzing the orbits of dozens of hot Jupiters, a team of astronomers found a way to catch giant planets in the process of getting uncomfortably close to their stars. The new analysis, submitted January 27 to arXiv.org, pins the blame for the weird worlds on gravitational kicks from other massive objects orbiting the same star, many of which destroyed themselves in the process.

Hot Jupiters have long been mysterious. They orbit very close to their stars, whirling around in a few days or less, whereas all the giant planets in our solar system lie at vast distances from the sun (SN: 6/5/17). To explain the odd planets, astronomers have proposed three main ideas (SN: 5/11/18). Perhaps the hot Jupiters formed next to their stars and stayed put, or maybe they started off farther out and then slowly spiraled inward. In either case, the planets should have circular orbits aligned with their stars’ equators, because the worlds inherited their paths from material in the protoplanetary disks that gave them birth.

The new study, though, favors the third idea: Gravitational interactions with another giant planet or a companion star first hurl a Jupiter-sized planet onto a highly elliptical and inclined orbit that brings it close to its star. In some cases, the planet even revolves the wrong way around its star, opposite the way it spins.

In this scenario, every time the tossed planet sweeps past its sun, the star’s gravity robs the planet of orbital energy. This shrinks the orbit, gradually making it more circular and less inclined, until the planet becomes a hot Jupiter on a small, circular orbit, realigned to be in the same plane as the star’s equator.

Stars usually circularize a planet’s orbit before they realign it, and cool stars realign an orbit faster than warm stars do. So Rice and her colleagues looked for relationships between the shapes and tilts of the orbits of several dozen hot Jupiters that go around stars of different temperatures.

Generally speaking, the team found that the hot Jupiters around cool stars tend to be on well-aligned, circular orbits, whereas the hot Jupiters around warm stars are often on orbits that are elongated and off-kilter. Put another way, many of the orbits around warm stars haven’t yet had time to settle down into their final size and orientation. These orbits still bear the marks of having been shaped by gravitational run-ins with neighboring bodies in the system, the team concludes.

It’s a “simple, elegant argument,” says David Martin, an astrophysicist at Ohio State University in Columbus who was not involved with this study. “They’re presenting the evidence in a new way that helps strengthen” the idea that other massive objects in the same solar system produce hot Jupiters. He suspects this theory probably explains the majority of these planets.

But it means that innumerable giant worlds have suffered terrible fates. Some of the planets that hurled their brethren close to their stars ended up plunging into those same stars themselves, Rice says. And many other planets got ejected from their solar systems altogether, so today these wayward worlds wander the deep freeze of interstellar space, far from the light of any sun.