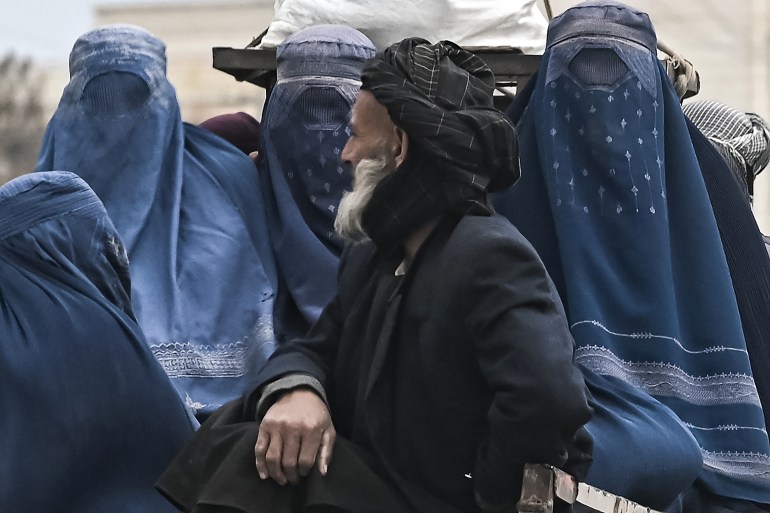 Kabul, Afghanistan – Many Afghan women in the capital Kabul have protested against a poster campaign launched by the Taliban, encouraging women to wear a burqa or hijab.

The Afghan Ministry for the Promotion of Virtue and Prevention of Vice plastered posters across Kabul’s cafés and shops earlier this month to encourage the wearing of the burqa, a full-body veil that also covers the face. It did not issue an official directive.

“According to Sharia law, a Muslim woman must observe the hijab,” wrote the posters, along with pictures of blue burqa-clad women and others in full black. The word “hijab” accompanied each picture as if to clarify what that should look like.

Many Muslim women around the world choose to wear the headscarf – in a variety of styles – as an expression of their faith and part of their cultural identity.

Afghan women have traditionally worn the burqa – mostly sold in shades of blue, white and grey – but the black robes are less common across the country.

The Taliban, which returned to power in August, has clarified that the dress code is not mandatory, but insists women should cover their bodies as required by their Islamic faith. During their last stint in power between 1996 and 2001, the wearing of the burqa was strictly enforced.

Today, the streets of downtown Kabul are filled with women wearing various styles of the veil. While some dress in burqas that cover their faces, others wear headscarves and an array of mixed traditional and western fashion.

Many Afghan women don’t see what the fuss is about – because the headscarf is already part of many Afghan women’s daily attire – while others condemned it as an infringement on their freedoms.

“As Afghan women, we know our religious rights and obligations,” said Jamila Afghani, a women’s rights activist and former deputy minister of labour and social affairs.

“It should be a woman’s choice to wear what she wants,” said Afghani, who also heads the Women’s International League for Peace and Freedom (WILPF) in Afghanistan.

To Afghani, the campaign also shows a Taliban obsession with unimportant matters in the midst of a deepening economic crisis that has left many families unable to feed their children.

“They should be busy working on more important things than women’s outfits,” said Afghani. “Most women already wear a traditional chador [shawl or headscarf], so why is this even being raised.”

Ministry for the Promotion of Virtue and Prevention of Vice spokesperson Muhammad Akif Muhajir told Al Jazeera that because the hijab or burqa is a “Qurani order”, Muslim women should wear it.

“If Sharia orders them [women] to do something they should act upon it,” he said, adding that the hijab or burqa could be “anything that a woman uses to cover her body… a hijab or the blue burqa or in some parts women use big shawls to cover themselves”.

Despite there being no policy to impose the wearing of the burqa, nor punishments for women who do not adhere to the advisory, there have been sporadic reports of Taliban soldiers trying to enforce it.

“These things tend to become problematic in the absence of clear guidelines and training for fighters,” said Obaidullah Baheer, a lecturer on transitional justice at the American University in Afghanistan.

“When they [Taliban fighters] are given impression [by their leaders] to be responsible for morally policing the society, they are bound to abuse their authority,” he added.

Some Afghan women dispute the Taliban’s claim that covering up – especially the face – is absolutely required for women.

Sonia Ahmadyar, a 36-year-old mother of three said: “I am completely against enforcing a certain dress code on women. We should not be forced to wear something we don’t want.”

According to Afghani, the Taliban’s burqa recommendation is not what Islam asks of women. “If they [the Taliban] are talking about Sharia, Islam doesn’t specify an outfit for women.

“This poses the question: do the Taliban even understand Shariah?”