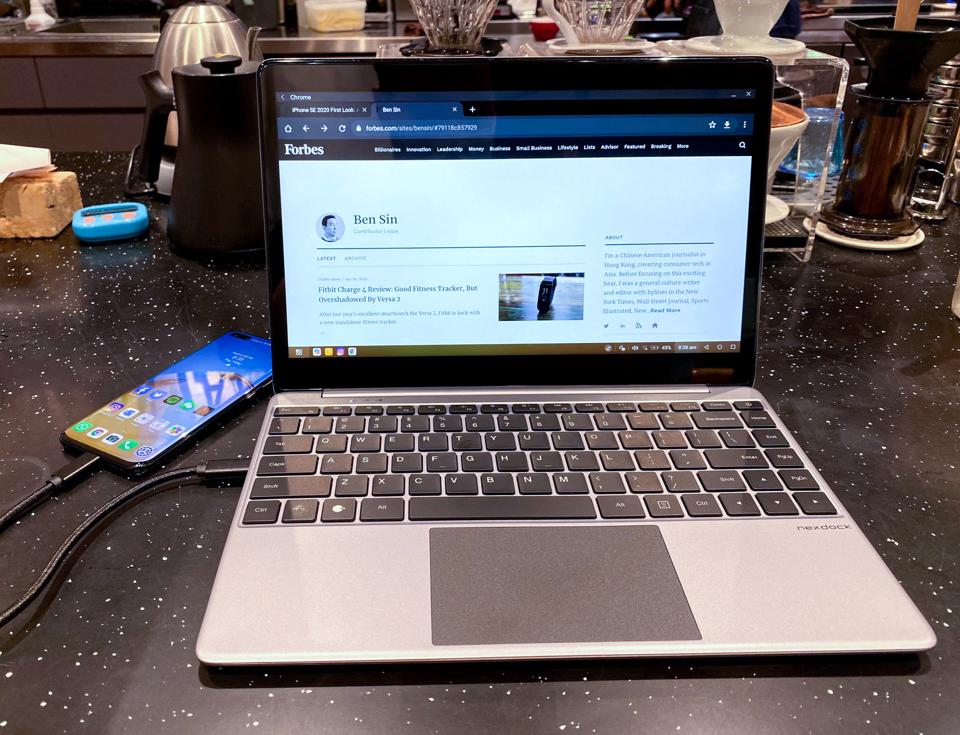 Smartphones have gotten so powerful that they’ve long become personal computers for some, including myself. I’ve edited videos, written articles, and taken product shots for professional platforms with just a smartphone over the past couple of years. It’s not my ideal set-up—I still prefer to work with a larger screen and proper keyboard—but smartphones have been more than powerful enough to do “real work” for a few years now.

Samsung and Huawei have been aware of this. That’s why each company launched a desktop version of its mobile software in 2017, which I reviewed here and here.

Both Samsung’s DeX and Huawei’s EMUI Desktop work the same way: simply plug the phone into a monitor or a TV via USB-C or HDMI, and the desktop version of Samsung’s or Huawei’s software boots up. Of course, just the screen isn’t enough. You’d need a keyboard and a mouse or trackpad to actually use the phones like a computer. Needing to carry three separate items just to turn a phone into a work machine on-the-go is a bit of a hassle.

The NexDock looks to change that. It is essentially a laptop “shell”—it has all the outer appearances of a laptop but lacks the crucial internals such as processor, memory, and hard drive. But it does have the three accessories needed to turn Huawei and Samsung phones into a computer: a screen, keyboard, and trackpad.

Meetings Aren’t What They Used To Be. Here’s How To Make The Most Of It.

College Signing Day Is For All Students—Especially Transfers

I plugged in both my Huawei P40 Pro and Samsung Galaxy Fold and both times the NexDock booted up the respective desktop software right away. From there, using the NexDock feels like using any other laptops. Huawei’s EMUI Desktop and Samsung’s DeX are not just blown-up versions of the mobile software; it is a full-fledged desktop software that resembles a Windows, with multi-window support and the familiar “start menu” bar at the bottom of the screen.

All the apps on your phone will run in desktop mode, although some, like Instagram, will show up in weird aspect ratios. But virtually every productivity app I tested—Google Docs, Microsoft Word, Excel, and various web browsers—all appeared in desktop format.

In terms of hardware, the NexDock obviously takes its design cues from Apple’s MacBook Air: from the space grey aluminum coating to the black keyboards to the way the machine tapers into a narrow point at the base. There’s a lot to like with the hardware: the 13.3-inch screen has respectable resolution of 1,920 X 1,080 and pumps out vivid colors; the keyboard is backlit and has a lot of travel. In fact, the keyboard is a major improvement over Apple’s universally-loathed butterfly keyboards used in MacBooks from 2016-2019. There is also a good selection of ports: a USB-A 3.0, an HDMI output, three USB-Cs, a headphone jack, and a Micro-SD card slot.

Now, the bad: the bezels around the screen are chunky and unsightly, and the trackpad is not enjoyable to use. There is a rough coating that causes a lot of friction when I scroll, and it’s a bit jumpy and unreliable. The good news is there are enough ports for me to plug in a mouse.

There is a 6,800 mAh battery inside, which can power the machine for seven hours. But this also depends on the smartphone’s battery life. A Huawei phone can last seven hours easily, even when functioning as a computer. A recent Samsung phone with a large battery, like the S20 Ultra, will too. But use an older Samsung like a Galaxy S8 and the phone is going to give out before the battery does.

But why buy this instead of a budget laptop?

The NexDock is being sold on the company’s website for $250. The price appears a bit high for a “shell” that cannot function on its own. And there are no shortage of budget laptops or Chromebooks—computers that can function on its own—that can be had for around the $300 range.

But there is a major advantage in getting the NexDock over a similarly priced laptop: the Kirin 990 in the Huawei P40 Pro or the Snapdragon 855 in the Samsung Galaxy Fold are far more powerful than the processors in any laptop under $1,000. I can edit 4K videos via the app PowerDirector on any recent Huawei or Samsung phone without issue. No budget laptop can handle 4K video editing.

And because the NexDock is only a shell, that means you can keep upgrading the processor anytime you upgrade your phone. In three years, I can in theory plug in a 2023 Samsung phone and get 2023 processing power on the NexDock.

But there are cases against buying the NexDock too. Only smartphones that have dedicated desktop software can use the NexDock, and right now, that’s only Samsung and Huawei. If your phone is an iPhone or a Xiaomi, the NexDock will not work.

So if you decide to commit to the NexDock as your on-the-go work machine, you’ll need to commit to owning a Huawei or Samsung phone.