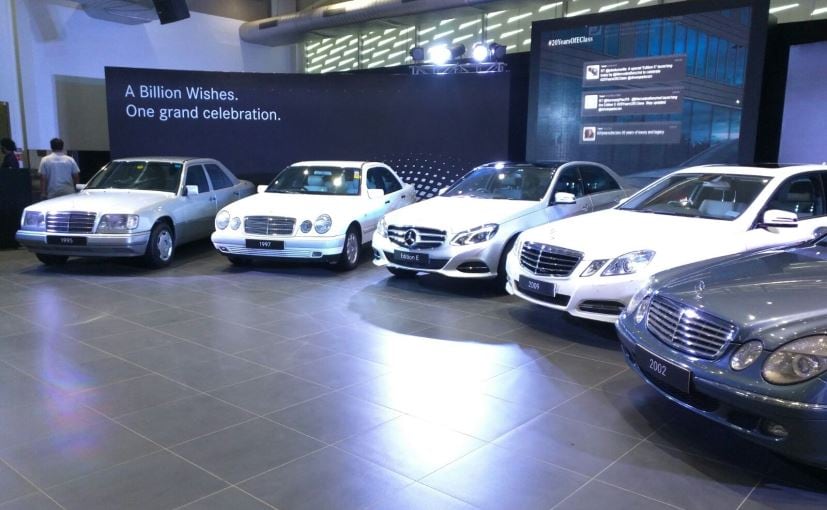 Mercedes-Benz India today launched a new limited edition of the E-Class, tagged ‘Edition E’, which has been priced from 48.6 lakh to 60.1 Lakh (ex-showroom Delhi). The new Edition E will also be available in 3 variants – E200, E250 and E350 CDI. While the E200 petrol is priced at 48.6 lakh, the diesel powered E250 and E350 CDI have been priced at 50.7 lakh and 60.61 lakh respectively (All ex-showroom, Delhi).Now, if the year 2015 was aggressive for Mercedes-Benz in India then 2016 is the year of celebrations, which is exactly what the new E-Class marks. Apparently the Stuttgart-based carmaker has completed 20 years since it first rolled out its locally assembled E-Class in India and is celebrating this exceptional feat Mercedes-Benz has launched the Edition E. Displaying the success of the Mercedes-Benz E-Class over the years, the carmaker showcased all the 5 generation of E-Class on the stage today.

It was around 2 decades ago Mercedes-Benz started the local assembly with its E-Class W124. Over 2.7 million units of this car produced globally before we got the E-Class W210 in 2002. The E-Class W210 was also the first car globally to get the guard edition. In fact the company has sold over 32,000 units of the E-Class since the beginning of its production in India in 1995. The E-Class 211 rolled out in 2009. Today the car remains the highest selling luxury sedan in India.

Coming to the car itself, the new Mercedes-Benz Edition E is essentially the same recent edition of the E-Class with some additional features and of course, the ‘Edition E’ badging. The front end has been slightly tweaked and now features restyled headlamps and grille pattern. Some of the new features that we will find the in the new Edition E include – Edition E badging on both the sides, navigation system from Garmin is now standard and rear seat entertainment unit.

Under the hood the Edition E is same old E-Class and continues to offer the same engine options as the current standard E-Class. The E200 gets the 2.0-litre in-line petrol engine that churns out a maximum power output of 184bhp and develops a peak torque of 300 Nm. The E250 and E350 are powered by a 2.2-litre and 3.0-litre diesel engines that makes 240bhp and 500 Nm of torque and 265bhp and 620 Nm of torque respectively. All three variants come mated to a 7-speed automatic gearbox sending power to the rear wheels.