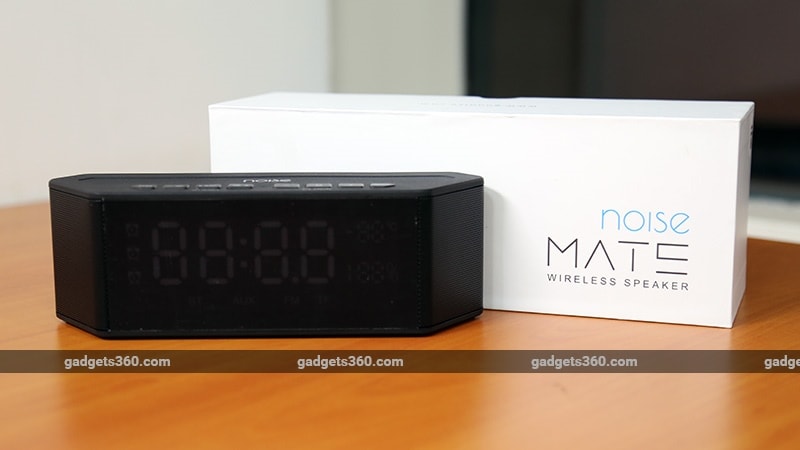 Bluetooth speakers are a convenient way to share music with people around us. We already have quite a lot of Bluetooth speakers in the market but Noise, the maker of the Noise Play action camera, has gone ahead and added another one to that list. The Noise Mate is priced at Rs 2,999 and isn’t your conventional portable Bluetooth speaker, but more of a Bluetooth-enabled clock radio for your bedside. Does the Noise Mate sound as good as it looks? We tune in for the answer

At first glance it is hard to tell that the Noise Mate is a Bluetooth speaker, it looks more like a modern bedside clock. The front sports a big seven-segment display which shows the time, current room temperature, humidity, and status of alarms. It shows the time in the 24-hour format and we couldn’t find a way to switch to the 12-hour format. There are metallic mesh speaker grilles on either side of the display. The same covering extends all the way to the back, to what looks like a bass port. The Noise Mate has two 5W driver units with 40mm diaphragms, and an impedance of 9 Ohms. 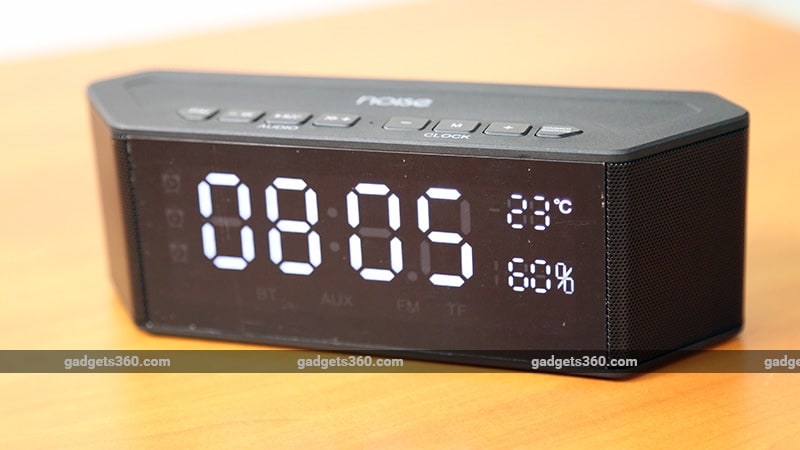 On the top, there are buttons to control audio playback and change the clock settings. There’s also a dimmer switch which can be used to adjust the brightness of the panel. There are three brightness levels, but you also have the option to switch the display off completely. At the back, there’s a power switch, an aux input, a microSD card slot, and a Micro-USB port for charging. The Noise Mate is powered by a 2200mAh Lithium-ion battery which can be topped up using any smartphone charger. Noise ships the Mate with an aux cable and a Micro-USB cable.

The alarm clock speaker weighs around 320g and has a thin rubber lining around the bottom to keep it stable. It supports Bluetooth 4.2 LE along with the AVRCP, HSP, HSF, and A2DP Bluetooth profiles, which is good for a speaker at this price. Overall, the build quality is good and while some buttons are a little wobbly, they offer good clicky feedback

While we have reviewed multiple speakers at Gadgets 360, the Noise Mate is the first alarm clock speaker we tried out. Power the device on and it displays the time, current room temperature (which we found to be fairly accurate) and humidity percentage. You will need to long-press the Mode button to cycle between different audio sources – Bluetooth, microSD, aux, and FM.

Pairing a smartphone with the Noise Mate is quite easy, and we used a Pixel 2 (Review) to test this speaker with. However, the speaker plays prerecorded voice snippets in badly translated English and an unintelligible accent to announce its status every time you change modes, turn Bluetooth on, and pair or unpair a device. There’s no way to turn this off and they quickly go from amusing to aggravating.

We also found that the volume control is synced with the smartphone in only one direction. This means that raising or lowering the volume using your phone works as expected, but the devices go out of sync if you use the buttons on the speaker. For example, if you have been using the speaker at full blast, and lower the volume using the speaker buttons, the phone still thinks it’s at 100 percent. A while later if you use the phone to try to raise the volume, it immediately jumps to 100 percent because that’s where it was. On the other hand, Bluetooth range is decent and the audio does not skip when the phone is within a line of sight. 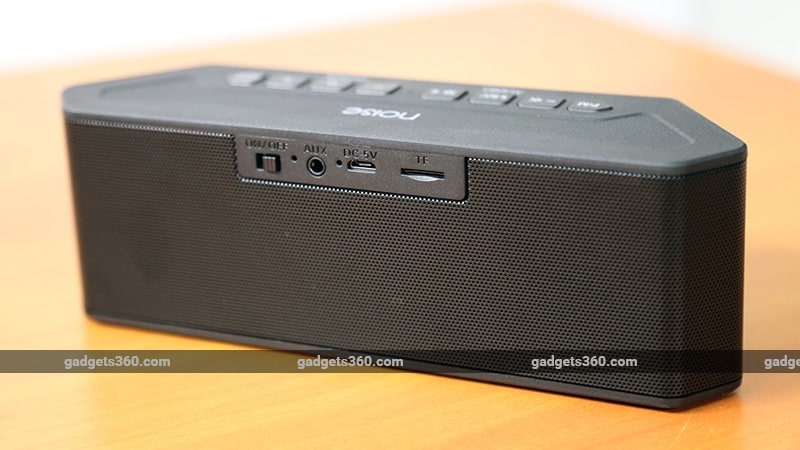 You can use the Noise Mate to take calls thanks to its built-in microphone. For an incoming phone call, the Noise Mate also slowly reads out the phone number of the caller, digit by digit, which isn’t very helpful and also cannot be disabled. We took a few calls on the Noise Mate and found that it works well enough. Sound quality was fine, and we did not have any complaints from the people we were talking to.

The Noise Mate searches for available FM stations and saves them automatically. We couldn’t find a way to fine-tune or manually add a station to the list. It has a built-in antenna which means less clutter, but reception is weak indoors, and works best when the unit is placed near a window. We also tried using a microSD card filled with MP3s and it could play them without any trouble.

Though the speaker can get really loud, the sound quality from the Noise Mate is sadly average. With most songs, we found that it lacked separation. Most of the time the bass and the highs would easily overshadow the mids. Songs with heavy bass sounded jarring at mid to high volumes, severely affecting the listening experience. While rock music sounded all over the place, we could listen to softer tracks for a lot longer. In songs such as I Stand Alone by Godsmack and Lazarus by Porcupine Tree, the Noise Mate sounded hollow. The mids felt suppressed, while highs and lows felt boosted. 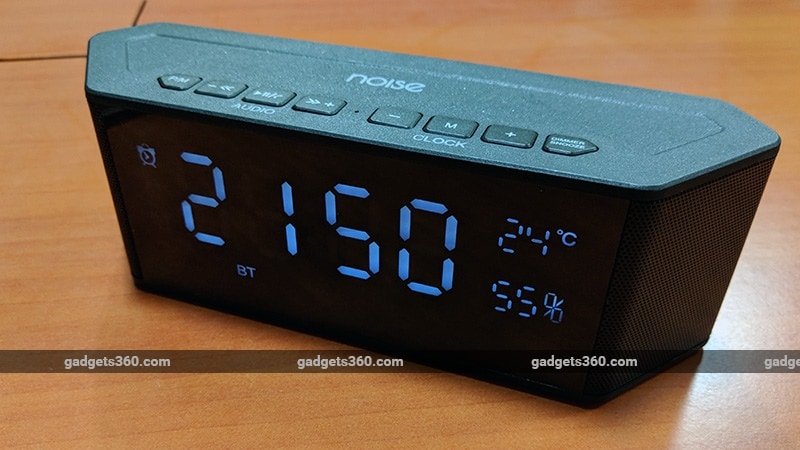 Apart from playing music, we did use the Noise Mate as an alarm clock. It allows you to set up to three alarms, which can be handy. As for the alarm tone, you can select from a few preset ones or use FM or the microSD card to play music from. In terms of battery life, the Noise Mate will last for 3-4 hours of continuous playback which is lower than what the similarly priced Toreto Aqua could manage. It will last considerably longer when used only as a clock. Once the battery runs down you can charge it using a Micro-USB cable. We used a 2A charger and were able to top it up completely in less than two hours.

The Noise Mate is a good-looking alarm clock but falls short when it comes to delivering your tunes. If you are looking for an alarm clock that can play soft music by your bedside, then the Noise Mate makes some sense. But if you need a good Bluetooth speaker more than anything else, you will have to look elsewhere.