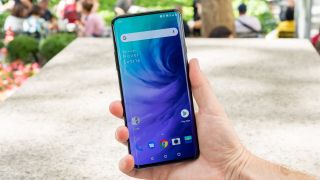 We were expecting the OnePlus 8 series of phones to include a 5G device, a precedent set by the OnePlus 7 Pro 5G; but it seems there will be two, and perhaps three handsets with next-gen connectivity in the upcoming range.

That’s based on an interview Pete Lau, the CEO of OnePlus, gave to CNET in which he said the company was going “all in on 5G” and added: “I think that this year again everyone should expect a lot to look forward to […] 5G products with a reasonable price.”

The interview focused on OnePlus’s 5G plans, with Lau saying: “I want to restate our commitment to 5G and our long term investment” and “going forward, we’re all in on 5G”. It’s worth mentioning that it doesn’t seem Lau was necessarily talking about the OnePlus 8 devices in that latter quote.

Lau doesn’t go so far as to confirm the OnePlus 8 phones will only be 5G devices, so there could be a 4G versions too. The OnePlus 7 Pro had a 4G variant, so the OnePlus 8 may follow suit, with OnePlus adopting Samsung’s strategy for its Samsung Galaxy S20 phones, two of which come in both a 4G and 5G option in some regions.

We’ve also previously heard there will be a OnePlus 8 Lite, and this could be a 4G ‘budget’ phone to go alongside the other OnePlus 8 phones, although CNET posits that this could actually be released later in the year.

If you’re thinking the OnePlus 8 could be your first 5G phone, there could be a catch: while OnePlus phones are typically mid-range in price, Lau has strongly hinted that its 5G phones will be more expensive.

“The new technology does add cost, so costs have risen in comparison to 4G products,” Lau said in the same interview, suggesting the 5G OnePlus 8 phones would be pricier than previous 4G handsets.

5G phones in general are pretty pricey, even the so-called ‘affordable’ ones, so this news shouldn’t come as a shock; but if you’re a fan of OnePlus phones, but you don’t need 5G and don’t fancy shelling out for it, keep your fingers crossed that there will be a more affordable 4G option too.