Qualcomm confirmed its Snapdragon Night event is set to take place on May 20 in China from 8PM local time. The two big announcements expected at the event are the Snapdragon 8 Gen 1+ and Snapdragon 7 Gen 1 platforms.

The former is touted to offer slight improvements over the current Snapdragon 8 Gen 1 with a minor GPU upgrade while still using the same CPU structure – one Cortex X2 prime core at 3Ghz, three Cortex A710 performance units and four Cortex A510 efficiency cores. 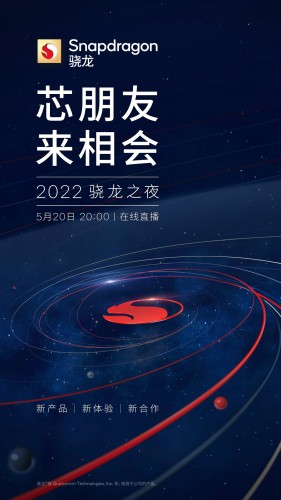 The new flagship chipset is said to be fabbed on TSMC’s 4nm process. Motorola is expected to be one of the first makers to use the new chip in its Edge X30 phone.

Snapdragon 7 Gen 1 will reportedly feature four Cortex-A710 performance cores clocked at 2.36GHz and four A510 units humming at 1.8Ghz alongside the Adreno 662 GPU. Oppo is rumored to unveil its Reno8 on May 23 with the brand-new SD 7 series chipset.