Over the past six months, we have seen tons of new phones and it’s crazy that there’s still more to come. In July, we expect to see phones like the Redmi K20 Pro, Realme X and Galaxy A80, among others. Apple and Google will also launch their flagship phones in a few months while Samsung and Huawei are expected to launch phones like the Galaxy Fold, Galaxy Note 10, Mate X and Mate 30 Pro, respectively.

There are plenty of new phones that are already available in India ranging from affordable to top-end. In our list for the month of July, we take a look at some of the best phones that you can consider depending on your budget.

Cheapest smartphone that money can buy

The Redmi Go is a great entry-level smartphone for first time smartphone users or those making a switch from feature phones. The Redmi Go is an Android Go device which runs on a stock, lightweight version of Android Oreo with Go-based apps that have been optimised to run smoothly on a phone low on RAM and storage. The Redmi Go offers a 5-inch HD display, a Snapdragon 425 chipset, 1GB of RAM and 8GB of inbuilt storage.

The Redmi Note 7 is a dependable sub Rs 10,000 phone. For a budget price, you get a premium glass design and a powerful Snapdragon 660 chipset, which is pretty rare to find in this segment. The Redmi Note 7 also sports a 6.3-inch FHD+ waterdrop display, a large 4,000mAh battery and a Type-C port. As for the cameras, you get a decent 12MP + 2MP setup on the back and a 13MP selfie camera.

The sub-Rs 15,000 is clearly seeing the fiercest competition right now. Currently, there are four major phones that offer some of the best specs you can find in this segment – the Realme 3 Pro, Redmi Note 7 Pro, Galaxy M30 and Vivo Z1 Pro. Starting with the Realme 3 Pro, you get a Snapdragon 710 chipset, which makes it the only phone under Rs 15,000 to offer this processor. It also comes with a glasstic rear panel, a bright 6.3-inch FHD+ waterdrop display and VOOC 3.0 fast charging support along with a long-lasting battery. Next up is the Redmi Note 7 Pro, which goes head-to-head against the Realme 3 Pro as far as specs go. With an all-glass design and a 6.3-inch FHD+ waterdrop display, the Redmi Note 7 Pro offers an attractive design. It also houses a large 4,000mAh battery and a snappy Snapdragon 675 chipset. Perhaps the best feature about the Redmi Note 7 Pro is that it is the most affordable phone with a 48MP dual camera setup, which means it is one of the best camera phones in its segment.

The third best phone in this segment is the Galaxy M30, which is easily one of Samsung’s best affordable phones in 2019. The Galaxy M40 is the one to go for among the three if you’re looking for an attractive display since the Galaxy M30 sports a fantastic 6.4-inch FHD+ (2340×1080) Super AMOLED screen. It also gets a triple camera setup that includes a wide-angle lens to offer more versatility. The Galaxy M30 sports a gradient design and a massive 5,000mAh battery, which means it is a phone that will easily last you over a full day.

Lastly, we have the Vivo Z1 Pro which was launched in India earlier this month. The Vivo Z1 Pro is a feature-packed smartphone that stands pretty well against phones from Redmi and Realme. It is notably the first Snapdragon 712 phone in India and it is also the most affordable phone to offer a punch-hole display. The Vivo Z1 Pro sports a 6.53-inch FHD+ display, houses a 5,000mAh battery with support for 18W fast charging and a triple camera setup. It also sports a 32MP selfie camera and runs on Android 9 Pie with Funtouch 9.0 on top. Motorola has been pretty quiet in India this year, launching just a few smartphones. The most notable of them is the newly launched Motorola One Vision, which offers a unique 21:9 display, which is essentially a widescreen display that is perfect for watching movies. The One Vision sports a 6.3-inch FHD+ LCD display and runs on an Exynos 9609 chipset. It ships with a near stock Android 9 Pie software. It also gets a 48MP Samsung GM1 sensor on the back with support for Night mode and a 25MP front-facing camera.

The Galaxy A50 continues to be one of the best phones you can buy under Rs 20,000. While Samsung did launch the Galaxy M40 in India recently, we feel the A50 offers more bang for the buck as it offers a bright and vivid 6.4-inch FHD+ (2340×1080) Super AMOLED Infinity-U display and a powerful 2.3GHz octa-core Exynos 9610 chipset. It also comes with an in-display fingerprint sensor, a long-lasting 4,000mAh battery and a 25MP triple camera setup that captures some great pictures in most lighting conditions. Lastly, it also gets a headphone jack which is missing on the Galaxy M40. 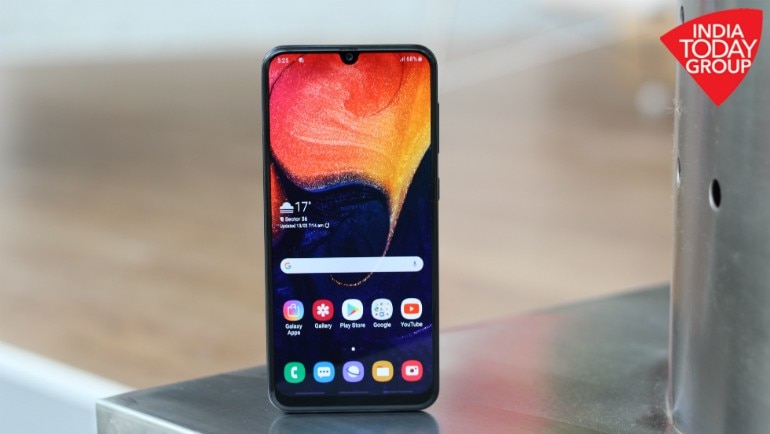 The Poco F1 could be nearing its end of cycle, but the phone still leaves an impact despite being a year old now. The Poco F1 continues to be the most affordable phone to run on a flagship Snapdragon 845 chipset. Additionally, it also offers a 6.18-inch FHD+ display, some good quality dual cameras and a large 4,000mAh battery. The Poco F1 has already been updated to Android Pie and is due to get Android Q in the future as well.

OnePlus surprised everyone by launching the OnePlus 7 at Rs 32,990 considering the OnePlus 6T was launched a few notches higher last year. The OnePlus 7 offers a design similar to its predecessor, but with an upgraded Snapdragon 855 chipset. The OnePlus 7 offers a 6.41-inch Optic AMOLED display along with a 48MP dual camera setup. The base mode is offered with 6GB of RAM and 128GB of internal storage and the phone runs on Android Pie-based Oxygen OS. It also houses a 3,700mAh battery with 20W fast charging support.

The Honor 20 slots right beside the OnePlus 7 as far as flagship specs go. The Honor 20 comes with a premium glass design and a punch-hole cutout. It sports a 6.26-inch FHD+ screen and is powered by a blazing fast and power efficient Kirin 980 chipset. The best feature about the Honor 20 is its quad camera setup that includes a 48MP main camera, 16MP super wide-angle lens and two 2MP sensors that includes a depth sensor and macro lens.

Perhaps the best designed phone of 2019, the Oppo Reno 10x Zoom is a work of art. It looks stunning with its 3D curved rear glass in a frosted matt-like finish, a camera system that sits flush with the glass and a unique shark-fin pop-up selfie camera. It is also as flagship as it can get with a Snapdragon 855 chipset, 6.6-inch notchless FHD+ AMOLED display and a 4,065mAh battery with support for VOOC 3.0 fast charging. The OnePlus 7 Pro is the first Pro model from the company and it is where OnePlus has introduced some extra premium features such as a 90Hz display. Like the regular OnePlus 7, the OnePlus 7 Pro is also powered by a Snapdragon 855 chipset. It doesn’t get a notch but rather a pop-up selfie camera. The OnePlus 7 Pro gets a 48MP triple camera setup that includes telephoto and wide-angle lenses as well. It houses a 4,000mAh battery and supports 30W Warp Charge as well.

Best phones that money can buy

Huawei has clearly managed to get ahead of its competitors like Apple and Samsung when it comes to offering innovative features like say a quad camera setup that includes a periscope zoom lens with 50x zoom support. The Huawei P30 Pro easily offers the best camera system right now that is not only versatile but also fantastic in low-light. The P30 Pro sports a 6.47-inch FHD+ (2340×1080) OLED display and is powered by a Kirin 980 chipset. It runs on Android Pie and offers a stellar battery life with 40W fast charging support. The Galaxy S10+ is the best Samsung phone you can get if you’re willing to pay a premium. While it offers a similar stunning design as the P30 Pro, what gives the Galaxy S10+ an edge is with regards to software. The flagship runs on One UI based on Android Pie which is cleaner and better optimised. The Galaxy S10+ also offers a gorgeous curved Infinity-O display and is powered by an Exynos 9820 processor.

The iPhone XR is usually available for as low as Rs 53,999 these days if you’re able to get the right deal. And this makes the iPhone XR the only latest iPhone to get. Not only is it more affordable than the iPhone XS and XS Max, but it also offers a far better battery life than the more premium iPhones. It may not get an OLED display, but the iPhone XR manages to stand its ground with some capable cameras and a blazing fast A12 Bionic chipset.