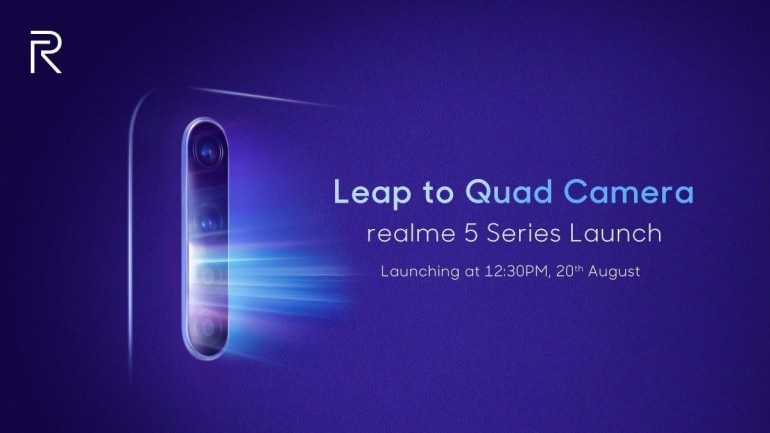 Realme is just a few days away from announcing the Realme 5 series. The company is holding an event in New Delhi on Tuesday, August 20 where it will launch the Realme 5 and Realme 5 Pro smartphones. They are expected to disrupt the market by being the first quad camera phones in their respective segments. The Realme 5 series will succeed to the Realme 3 series by offering upgraded cameras, better hardware and attractive designs.

Realme has been revealing some key details about the Realme 5 phones in the days leading up to the launch event. We know that both the phones will feature quad camera systems and we also know that at least one of them will pack a large 5,000mAh battery, both of which are first-time features for Realme.

As for its availability, Flipkart has already set up a page for the Realme 5 series, which means the phones will be available on the e-commerce platforms. They will also go on sale on Realme.com and are expected to sell via Realme retail stores across India.

Realme has been careful to not reveal too much about the designs of the Realme 5 and Realme 5 Pro. We can’t talk about what the display will look like or the look of the phones, but we do know that they will get vertically stacked cameras and a rear-mounted fingerprint as made evident from the teasers.

We know that the Realme 5 Pro will get a 48MP Sony IMX586 main camera along with an ultra wide-angle sensor, 4cm macro lens and a portrait camera. The Realme 5 is rumoured to get a 16MP main camera while the other sensors are expected to be the same as the Pro model. While companies like Samsung have offered wide-angle cameras on affordable phones, the added macro lens will definitely give Realme a boost against the competition.

As for the Realme 5 Pro, we have little to no information about its processor. It may get the same Snapdragon 710 SoC that powers the Realme 3 Pro and Realme X or the company may upgrade it to a Snapdragon 712 or Snapdragon 730 SoC as some rumours suggest.

Coming to the Realme 5 Pro, the battery capacity has not been revealed yet, but the company has confirmed VOOC 3.0 fast charging support. Both Realme 3 and Realme X also come with VOOC 3.0, which can charge the phone to 100 per cent in about 80 minutes. Realme 5 and Realme 5 Pro will ship with Android 9 Pie based on ColorOS 6.