ealme has garnered massive success in India in a span of just one year, which is not an easy thing to achieve today. In the budget and mid-range segments where companies like Xiaomi and Samsung have reigned supreme, Realme has managed to break through by offering some exceptional phones that look good and offer great hardware at disruptive prices. If last year was about getting the company’s name out there, 2019 looks to be about taking charge.

Last year, Realme launched phones like the Realme 1, Realme U1 and Realme 2 Pro that offered segment-disruptive hardware. The company is following a similar formula this year as well, but the only difference is that it is not looking to wait around anymore. While phones like the Realme 3 Pro and Realme X have brought segment-first technologies, the company is now looking to bring “world’s first” technologies such as a 64MP quad camera system.

The story so far

The Realme 3 Pro (Review) was launched in India earlier this year with a Snapdragon 710 chipset and VOOC fast charging support. Both these features are a first for a phone under Rs 15,000. Here, even a disrupter like Xiaomi has trailed behind. Of course, Xiaomi still continues to disrupt in its own ways, offering, for example, 48MP camera phones under Rs 15,000 i.e Redmi Note 7 Pro and Redmi 7S.

Then we have the Realme X which was launched in China a couple of months ago with a notchless AMOLED display, pop-up camera and a 48MP dual camera setup. These features have been seen on a number of phones this year, but not quite at a price that starts at approximately Rs 15,000. The Realme X is yet to launch in India, but from what Realme India CEO Madhav Sheth said a few weeks ago, the Indian variant will offer a slightly different hardware. This shows that the company is well aware of the competitive state of the Indian smartphone market and that even a phone with the kind of features that the Realme X China variant offers may not necessarily do exceptionally well in India.

There has been speculation that the Realme X will come to India with a Snapdragon 730 chipset, which would definitely be a first for a phone under Rs 20,000. And while we wait for the Realme X in India, which could possibly launch next month, the company is steamrolling ahead with its next major smartphone – a phone with a 64MP quad camera setup.

Realme is clearly not looking to wait around this year for someone else to offer a 64MP camera phone first. What’s surprising is that Realme was not considered in the running to launch a 64MP camera phone. There were rumours that Xiaomi or Samsung would be the first to launch a phone using Samsung’s 64MP GW1 sensor, but it turns out Realme is set to beat them to the punch. Sheth posted a camera sample on Twitter that was shot on this mysterious new Realme phone, claiming that it will be the world’s first phone with a 64MP Samsung GW1 sensor. 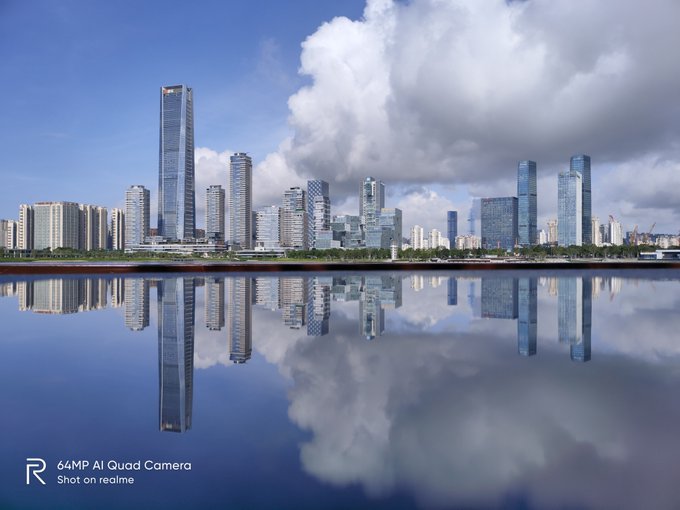 This speaks volumes of the kind of confidence Realme has right now. Not only will this upcoming Realme phone be the world’s first 64MP camera phone, but it will also be the company’s first phone with a quad camera setup. Realme is not afraid to take risks this year, which is a philosophy that was also followed by Xiaomi when it was trying to establish its own presence in India.

Apart from the cameras, we still have no idea about what to expect from this upcoming Realme phone. This Realme phone could launch as part of a brand new series in India, and it may well be the company’s most premium phone yet. A few days before the launch of the Realme X in China, Sheth told India Today Tech that the company is looking to bring “more innovations and more technologies” to its smartphones which should justify its price, whether it is under 20,000 or over it.

Realme currently has the ability to surprise fans and make the competition worry, which is what any brand strives to do. The next Realme phone could be the company’s most innovative phone yet or it could fizzle out, but it’s clear that the company is looking to go big. This mysterious Realme phone isn’t expected to launch before Q4, 2019, which suggests Realme is looking to close the year with a bang, not a whimper.