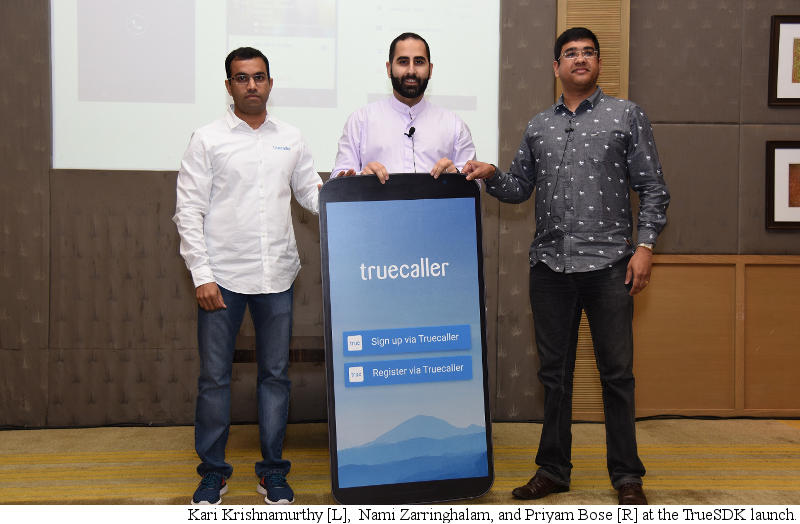 At a press conference in Bengaluru on Thursday, phone directory app Truecaller announced the launch of TrueSDK, which enables third-party app users to sign up with their Truecaller profile and also verify their phone numbers.

TrueSDK helps users quickly utilise their Truecaller credentials to log in to third-party apps and verify their phone numbers (if required), saving them time. The service can be used by developers to sign up, update a user’s information, or verify the user’s phone number based identity in their mobile apps through the users’ consent.

“It’s an onboarding and verification solution that lets users sign up and register with Truecaller. It’s free for developers and existing users, and it’s permission based. We ensured that it’s a light SDK that developers can use, and it’s as minimal as possible,” said Kari Krishnamurthy, Vice President, Growth and Partnerships, Truecaller at the press conference, later described it as combination of an autofill and a verified phone number.

The functionality is currently available on Android only, and has been launched with twelve partners, namely Quikr, Mobikwik, redBus, CarDekho, BharatMatrimony.com, Ixigo, Oyo Rooms, FreshMenu, Terraa, and ShopClues. The integration with these apps will go live soon, Krishnamurthy said.

“Besides the flexibility that we add to partners, the bigger value is that they get a phone number that otherwise requires infrastructural inputs,” said Nami Zarringhalam, Chief Strategy Officer and Co-Founder of Truecaller at the press conference.

“Instead of having every app developer build and maintain their own systems, they can now use TrueSDK and instead focus more on their core aspects of their app led offering,” said Priyam Bose, Director Worldwide Developer Relations at Truecaller.

Truecaller’s app is used by over 200 million users globally, and has over a 100 million users in India. The company has partnerships with smartphone OEMs like Samsung, Microsoft, LG, Micromax, and Gionee, and telecom operators such as Airtel and Tata DoCoMo. The company had extended its language support to Hindi, through real-time transliteration of the caller ID in November 2015.